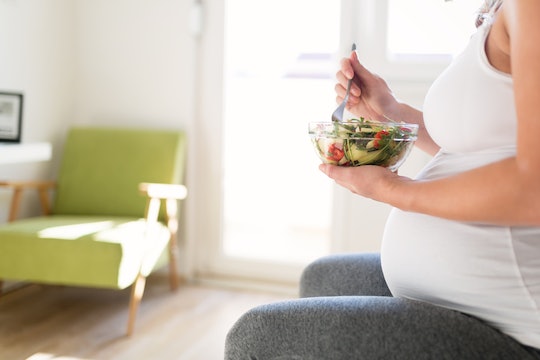 As someone who's followed a vegetarian diet for almost two decades now, I've heard all sorts of opinions from acquaintances and friends. One that I started hearing as early as 13 was: "Well, would you raise your children vegetarian? Would you stay vegetarian even during a pregnancy?" And while my reaction then — and now — is that it's probably nobody else's business what I eat and when, there are ways that a vegetarian diet during pregnancy might affect kids later in life, according to one new study.

Research published this month in Alcoholism: Clinical and Experimental Research (yes, I know, this is already not sounding too promising for my future offspring) found a correlation between moms' vegetarian pregnancies and their offspring's tendencies to misuse substances as teens. The study looked at the habits of over 5,000 mothers and their children, and found that the 15-year-old children of moms who ate less meat or no meat during their pregnancies were more likely to drink or smoke (both cannabis and tobacco) than the children of more carnivorous moms.

It's important to note, however, that the study only found a correlation between vegetarian pregnancies and teens' misuse of substances, which doesn't prove causation — and for now, researchers can only speculate as to what might cause that link.

The researchers also took a look at the moms' genetic makeup, and found that mothers whose genes allowed them to use vitamin B12 more effectively tended to have stronger correlations between their meat-eating and children's substance use. For moms whose bodies weren't quite as efficient with their B12, the link between meat-eating and children's substance use disappeared.

Due to the B12 findings, the scientists who conducted the study speculated that vegetarian moms' decreased levels of B12 during pregnancy could be causing kids' later tendency to misuse substances. After all, B12 helps fetuses grow and develop, and if moms don't get enough of it during pregnancy, it can affect fetal development, cause anemia and nerve damage, and increase the risk of miscarriage, as Livestrong noted.

Vegetarians can often be deficient in B12, since it's a vitamin that's found abundantly in meat and fish (and in smaller amounts in dairy and eggs), while virtually zero plant foods contain the vitamin. So if B12 is indeed what's causing kids to misuse substances later on, all vegetarians would have to do is make sure to get enough B12 during pregnancy. And yes, vegetarian B12 supplements and fortified foods are readily available.

Of course, the study doesn't mean that vegetarians need to start eating meat during their pregnancies. Instead, the study's lead author, Dr. Joseph Hibbeln, told ScienceDaily:

Our study points to the need to investigate potential health impacts, and solutions, for some women who choose to restrict certain food categories during pregnancy.

Whether the researchers' correlation comes down to B12 or not, the research should serve as a good reminder to vegetarian women (and all women, really) to talk to their doctors about nutrition during pregnancy.

"You can still get all the nutrients you need, but you can’t be cavalier," Dr. Shannon M. Clark, a spokeswoman for the American College of Obstetricians and Gynecologists, told The New York Times in June. Vegetarians should be especially mindful of getting enough iron and B12 in their diet, as well as folic acid.

If you have any concerns about how your vegetarian or vegan diet might affect your baby, talk to your doctor about setting up a meal plan to make sure you're getting enough of the vitamins and minerals you need. With supplements and the right foods in your diet, there should be no worries about affecting your baby — either now or 15 years down the road.