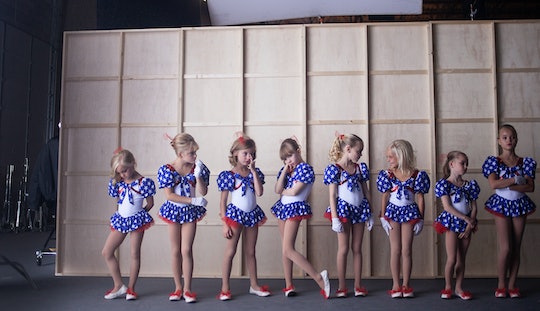 'Casting JonBenét' Takes A New Approach To The Mystery

Netflix's Casting JonBenét might be yet another look at a familiar story but it takes a different approach than any of the specials that have so recently revisited the JonBenét Ramsey case. Instead of interviewing those involved, retesting the evidence, or bringing on new experts, Casting JonBenét instead takes a more roundabout way of exploring how the case affected locals in Boulder, Colorado, where JonBenét was from. To do so, it blends fact and fiction. But how accurate is Casting JonBenét?

The most basic details of the case appear to be represented accurately, like the method of JonBenét's murder and the way she was found, but the documentary isn't really about that. Director Kitty Green instead auditioned actors from the Boulder area for a film about JonBenét and in doing so got them to open up about what they thought of the case. Interspersed with interview segments are reenactments. Since much of the documentary explores the pontificating of strangers, things like "accuracy" don't really seem to be the point. It's more about the impact the murder had on people than the murder itself. It's not about getting to the bottom of things or unearthing a culprit.

"What we're trying to do is look at or examine a community that has lived in the shadow of this media storm for the past twenty years, and how they have come to terms with a crime that's basically unsolvable," Green told the Chicago Tribune. "That was our interest. We don't consider it a true crime. I mean, it touches on true crime. And it touches on our appetite for true crime and how we're all so obsessed with it. That's sort of what we're more interested in than the case itself."

Casting JonBenét explores many of the popular conspiracy theories about JonBenét's death but reportedly doesn't subscribe to any one theory in particular. While the murder and its subsequent media attention are the catalyst and framing device of the documentary, it unearths more personal stories about the people being interviewed than it does the case that inspired it.

"There's this ability with documentary – it's real," Green said. "It's so much more emotional. It hits you that much harder, and that to me is so fascinating. And Casting JonBenét is blurred – it's got fictional elements as well as documentary elements. I think the stuff that breaks your heart is the documentary content and real people telling their stories."

Casting JonBenét doesn't appear to seek answers about a crime that may never be solved, but instead takes a more unconventional approach to understanding the aftermath of something so shocking and brutal.