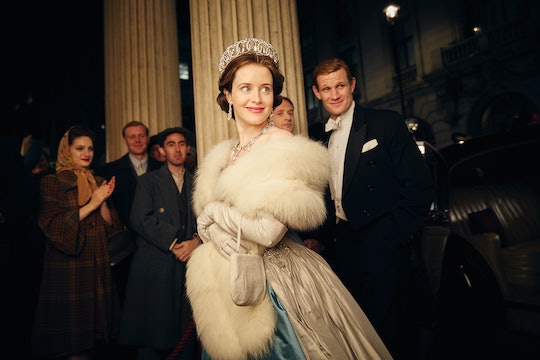 How Accurate Is 'The Crown'? The New Netflix Drama Blends Fact With Fiction

Netflix has been on a roll this year with their original content. From Orange is the New Black's much-discussed fourth season to the immediate phenomenon of Stranger Things and everything in-between, the streaming network has been impressing viewers, critics, and television awards academies alike. Their latest show is already shaping up to be Netflix's next big hit. The Crown, which released its full season today, follows the life of a young Queen Elizabeth II throughout the beginning of her reign. It's touted as a biographical drama – but how accurate is Netflix's The Crown, really?

According to the official series description, the new, British royals-centric show "tells the inside story of two of the most famous addresses in the world — Buckingham Palace and 10 Downing Street — and the intrigues, love lives and machinations behind the great events that shaped the second half of the 20th century." Its first season is at once a sprawling tale, telling the greater story of England at mid-century, and an intimate portrait of a ruler – England's second longest-reigning – who is largely considered one of the most unknowable and enigmatic.

Despite the fact that very little has been discussed and confirmed about Queen Elizabeth II's personal life, much of the larger story the series focuses on is rooted in truth. The first season, which highlights the monarch's early reign, has already drawn comparisons to Downton Abbey, though with a "weightier dose of history and politics." But the Netflix show's commitment to historical accuracy is much more apparent than its Masterpiece Classic predecessor. That historical accuracy comes with a high price tag, too – the show is reportedly one of the most expensive (if not the most expensive) projects ever produced, with a $130 million budget. Much of that budget has most likely gone towards creating authentic, stunning mid-1900s costuming, decor, and scenery, none of which can be expected to come cheap.

In addition to being tonally and visually accurate, the larger historical context is incredibly true to life as well. Historical events like The Great Smog of 1952, a severe air-pollution incident that affected London that year, is covered during Season 1.

But while the greater "public" aspects of the story have been kept as close to the reality as possible, creative liberty has obviously been taken with the private life aspects. Season 1 deals heavily with the personal relationship between the young Queen and her husband Philip, and how her unexpected ascension to the monarchy turned their marriage on its head. The particularities of their relationship (and Elizabeth's relationship with her "rebellious" sister Margaret) are obviously less known. According to interviews with TV Guide, it was up to the actors and writers to take their research into their real-life subjects' lives (which provided a "basis of believability") and "expose the private people underneath the royal family's well-documented public façade."

The creator of this particular show is uniquely qualified for a deep-dive into Queen Elizabeth's life – The Crown was created and written by Peter Morgan. Morgan also wrote a stage play called The Audience, about the weekly meetings between Queen Elizabeth and her prime ministers. In addition to the play, Morgan also wrote The Queen, which is arguably the most popular fictionalized account of the British monarch's life to date. So, clearly, he knows well what he's talking about when it comes to the British royal family.