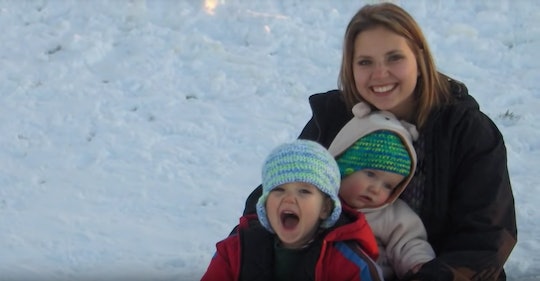 Susan Cox Powell's mysterious disappearance and the tragic death of her two young children at the hands of her husband Josh has turned into one of the most gripping domestic violence cases of the past decade. But viewers tuning into Oxygen's new docuseries about her may be wondering how accurate The Disappearance of Susan Cox Powell is. While soapy dramatizations of true crime stories tends to be Lifetime's bag, Oxygen's take on Susan's case is presented as a four-part docuseries told by Stephanie Bauer, an Access Hollywood entertainment correspondent, as well as a true crime correspondent for Oxygen.

The docuseries, which will air over the course of two nights, promises to deliver fresh theories about the nearly decade-old case, so while there will probably be lots of hypothesizing amongst various experts, The Disappearance of Susan Cox Powell does examine real evidence. "Alarming new developments, scandalous never-before-seen videos, and rare interviews with family members" are among the new offerings teased by the documentary's synopsis, but ultimately, the audience is left to draw its own conclusions.

From the looks of the trailer, the new video footage focuses on a combination of Susan's home video diaries, in which she expresses fear for her life, and home videos made by her father-in-law, Steve. According to Oxygen, he "made hundreds of hours’ worth of homemade videos, often documenting his sexual infatuation with her."

In one recording from about eight years before her disappearance, Steve reveals his feelings for Susan and she subsequently rejects him. During the course of the investigation, police also discovered Steve hoarding feminine hygiene products, cotton balls, and toenail clippings of Susan's, as well as pantyhose, underwear, and bras of hers he'd taken from her laundry hamper.

On the flip side, Alina Powell, Josh's sister and Steve's youngest daughter, comes forward for the first time in the docuseries, alleging that local law enforcement launched a "harassment campaign" that ultimately destroyed her family. In 2012, Josh locked himself and his two children inside his home, attacked them with a hatchet, and ignited a gas explosion killing all three of them, according to ABC News. Steve died of heart-related issues in 2017, after being convicted on charges of voyeurism and possession of child pornography in 2015, per Investigation Discovery. And Michael Powell, another sibling who fiercely defended his brother Josh and his father Steve, wound up locked in a legal battle with Susan's family over the $1.5 million life insurance policy left behind by Josh. In 2013, he, too, died by suicide, according to the Salt Lake City Tribune.

For all the troubling players in this case, no one has ever been charged with Susan's murder and her body has never been found. The Disappearance of Susan Cox Powell airs May 4 and 5 on Oxygen.