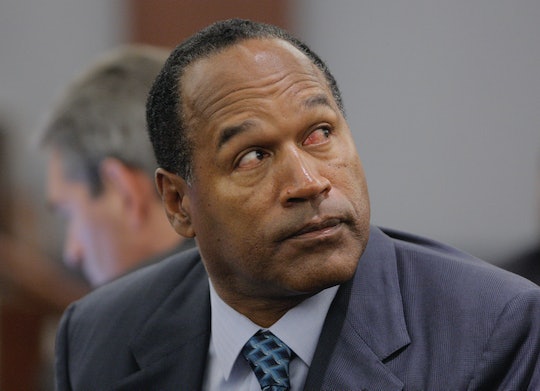 How Accurate is 'The People v. O.J. Simpson?' It Depends Who You Ask

From the start, everyone had their opinions on the FX American Crime Story miniseries based on the murders of Nicole Brown and Ron Goldman, from viewers who openly mocked John Travolta's portrayal, to family members and even more than one Kardashian. But journalist Jeffrey Toobin, who wrote the book The Run of His Life, on which the series was based, has always maintained the series wasn't a documentary. So how accurate is The People v. O.J. Simpson? Probably more accurate than many viewers think.

Now, David Schwimmer's portrayal of Simpson's lawyer and Kim Kardashian's dad might be a little strange, and no one seems sure about what Travolta was up to, but FX has said the 10-episode series is the true story. Additionally, even Toobin said it captured the "essential truths" of the case.

Khloé Kardashian did quibble with the portrayal of O.J. threatening suicide in Kim's room, according to the Huffington Post.

Not all the facts are accurate. When O.J. was contemplating suicide, it was in my room, not Kim's room. Theyre sort of sensationalizing the Kardashian name in it, I think it bring a younger audience in.

Prosecuting attorney Marcia Clark told Vulture she really liked the series, but that there was plenty of stuff the series got wrong. For example, she said, despite what happened in episode 6, she and Chris Darden never danced in her office or had all those discussions about calling Mark Furhman to testify.

But, she added, "They get the big stuff right."

And that's really all you can ask of a series that's real job is to draw in viewers and entertain. And no one will ever really know the truth, unless you are willing to believe what is reportedly Simpson's own account (though that's disputed) in the New York Times bestseller If I Did It. The facts and the folklore after all these years since 1994 has clouded everyone's recollection the details of the killings of Nicole Brown and Ron Goldman.

And, for those of us who can remember those months glued to the television while watching the trial unfold in what would later be recognized as the first true "reality" show, the series has been an eerie throwback to a time of an incredibly tense racial divide between black and white Americans, particularly living in Los Angeles, who had just lived through the Rodney King assault, the acquittal of King's police attackers, and the ensuing race riots. Fittingly, the Rodney King incident is featured in the series' premier. And, even all these years later, we're still riveted to the story of an American sports hero and the murder of his lovely wife.

So, maybe that's all fans can ask of anyone in retelling this tragic tale: to just get the big stuff right. Because there was plenty of big stuff swirling around the case of The People v. O.J. Simpson — the consequences of which still raises questions for people today.