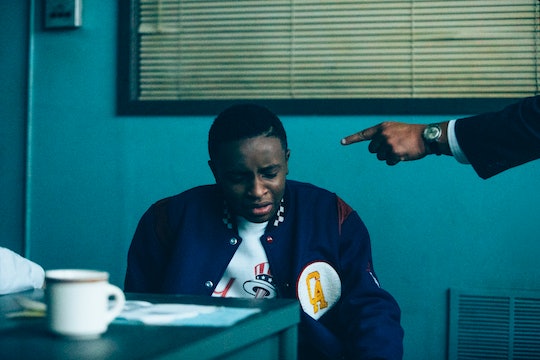 Netflix’s new series, When They See Us, is based on the true story of the Central Park Five — a group of young black and Latino teens who were wrongfully convicted of sexual assault and rape in 1989 — and it exposes the injustice and emotional struggles these men and their families suffered. The series features a number of closed-door, private moments, which has some viewers wondering how accurate When They See Us really is.

The series comes from award-winning filmmaker Ava Duvernay and the real Central Park Five — Antron McCray, Kevin Richardson, Yusef Salaam, Raymond Santana and Korey Wise. In an an interview with The Hollywood Reporter, Duvernay described how Santana reached out to her on Twitter after watching Selma, and asked her to tell their story. "It wasn't an idea that I pitched to them," DuVernay says. "It was an idea that they pitched to me, and I was honored that they chose me."

When They See Us comes straight from the men who lived it, so the story is as accurate as it can be. Plus, when talking to Rolling Stone, Duvernay revealed that along with talking to the five men and their families about their experiences, she used all the official court documents and media records she could get her hands on.

“...I folded in all of the court transcripts, different records and files that we were able to get a hold of through public means or private transfer,” she said. “We then read every single stitch of press coverage to really get an understanding of the ways in which this was being reported, to understand the propaganda around this case — But it always came back to the men and then their families. Over a four-year period, it was just exhaustive. Interviews, but sometimes just spending time, lunches, dinners, just getting to know them. Sometimes it’s the little things more than just the core stories.”

In an interview with NBC’s Lester Holt, the five men talked about the impact of When They See Us and how it felt to watch their stories unfold on screen. “This whole process was surreal, just to see our life story portrayed, and it still be relevant 30 years later,” said Richardson. “A series like this paints the picture of what it is like to be a person of color in America,” added Salaam. “For what we went through, what it represents for the rest of the world, is tremendous.”

The four-part series follows the men’s heartbreaking journey from the time they were first arrested for “wilding” in Central Park as teens, through to their coerced confessions, court case, incarceration, and eventual exoneration. Duvernay told Rolling Stone that when McCray, Richardson, Salaam, Santana and Wise watched the series with her for the first time, they were emotional throughout the entire screening. “It was the most humbling, magnificent, jaw-dropping and truly spiritual experience that I’ve had as a filmmaker,” she said. “They held hands, they hugged, they cried, they cheered, they saw themselves. And so when I’m asking people ‘When will you see them?’, I’m asking by seeing them, will you see all of the boys and girls and men and women who are black or brown, who are unseen or who are seen through the lens of criminality?”

When They See Us premieres on Friday, May 31 on Netflix.