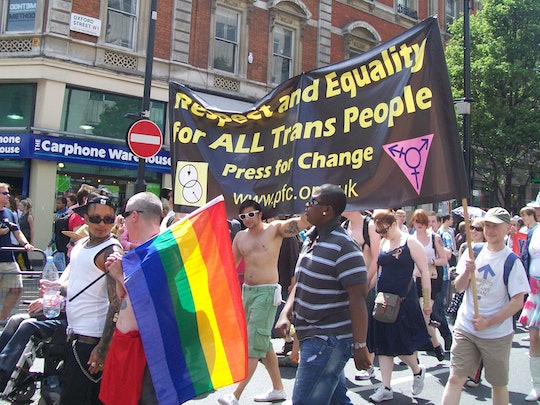 All over the South, transphobia has fueled a disturbing uptick in gender-identity based bathroom bills crafted under the guise of protecting kids. So far, Mississippi and North Carolina have succeeded in passing policies that, for many people, would make the simple act of using a public restroom a criminal offense. Policymaking based on fear and myth isn’t just ineffective, it can have far-reaching consequences, as many families across the South could soon be finding out. In an insane twist on an already abhorrent situation, these anti-transgender bathroom bills could affect parents and kids, too.

This past March, North Carolina lawmakers set off a firestorm of controversy with the passage of a bill banning anti-LGBT discrimination ordinances. According to the Huffington Post, the bill paved the way for passage of a so-called “bathroom bill” — a statewide policy that prevents trans people from using restrooms corresponding to their gender identity. According to advocacy organization the National Center for Transgender Equality, the Tar Heel state has so far been the only one to succeed in passing an anti-trans bill for public restrooms. Still, the organization’s website lists at least 40 anti-trans bills introduced in other states in 2016, up from 21 last year.

And since lawmakers have often used misplaced fears over potential child sexual abuse in restrooms as the driver for these laws, that the consequences could be so dire for kids in particular is a cruel irony. For starters, the laws would mean that many trans parents will have to explain to their children why they can’t use a certain bathroom. And parents of transgender kids have raised concerns over the 23 bills aimed at which restrooms their children are allowed to use in school, and which sports they can play, according to LGBT rights organization the Human Rights Campaign.

While some policies have included language exempting parents taking opposite-sex children into public stalls, others haven’t been as clear. Whether same-sex couples with opposite-sex children would be in violation of the new laws is an open question — just like the potential for parents of older children with special needs or adults caring for an opposite-sex parent with disabilities to fall victim to lawmakers’ current wave of anti-trans fervor.

But the answer isn’t for lawmakers in those states and cities to go back and make exemptions for the many care-giving roles that adults can have in their families. The laws are already insanely complicated, raising questions over who should report suspected violations and just how the laws would be enforced.

In a statement provided to CNN regarding an anti-trans bathroom law in Alabama, the first to criminalize using restrooms matching one’s gender identity, the Human Rights Campaign introduced those very concerns:

This anti-transgender law is unprecedented in its establishment of criminal penalties for violations of the law, and raises a myriad of privacy and legal concerns, including questions about how the law will be enforced.

No, rather than having lawmakers take up the task of imagining what protections parents and families might need from the new spate of anti-trans laws — or worse, expecting bathroom-goers to police what might be happening in the stall next to them — it would be far easier for lawmakers to simply respect people’s privacy.

Certainly, transgender people deserve the same protection of their dignity, self-determination, and agency that cis-gender people expect. And (as a bonus) it would actually be far less harmful to kids — and more respectful to families — in the bargain.