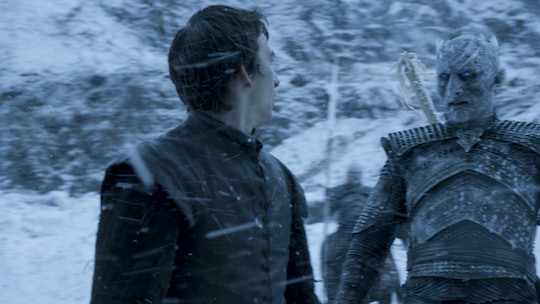 This Possible 'GoT' Connection Between Bran & The Night King Is Chilling

Now that Bran is the Three-Eyed Raven, he possesses an untold amount of power. While it mostly manifests in him looking superior while refusing to tell his siblings pertinent information, that's not all Bran can do. He has access to all the knowledge it's possible to have, which allowed him to reveal many a dark secret in his visions over the course of Season 6. But his visions have also given him a curious connection to the leader of the White Walker. But how are Bran and the Night King connected on Game of Thrones?

Viewers have seen them interact on screen, but it was an explosive meeting. Long before Bran was ready to take on the full responsibilities of the Three-Eyed Raven, he snuck off into a vision that gave him a bird's eye view of the Night King's numerous forces. (That army of the dead of his is no joke, my friends.) Usually the people in Bran's visions couldn't see him or interact with him, allowing him to creep on their lives with them being none the wiser. But, shockingly, the Night King turned to look at Bran. And then he reached out to grab Bran's wrist, branding him with an icy mark and giving the Night King an ability to track Bran down much easier.

But could the connection go deeper than that? It turns out they might share some important history.

Some viewers have begun to theorize that Bran might actually be the Night King. While it's difficult to imagine how a teenage boy and an ice zombie that's thousands of years old could be one and the same, the magic of Game of Thrones does make it slightly more plausible. Bran's ability to warg has gotten him in trouble in the past, quite literally; his decision to warg into a young man named Wylis resulted in that same young man becoming brain-damaged and turning into Hodor.

It's possible that Bran could take another trip into the past that will have repercussions on his future. He did witness the Night King's creation. If Bran went back to that same vision again and warged into the man who was transformed into the Night King, then that would result in him becoming the Night King (though it's hard to imagine why Bran would do such a thing). That could explain their connection, and why the Night King was able to touch him in a vision. Maybe it was because they're the same person.

It may seem a little farfetched even for Game of Thrones, but it's clear there's some kind of bond between Bran and the Night King that is sure to come to a head sooner rather than later. Fans will have to wait and see just what that connection might be.