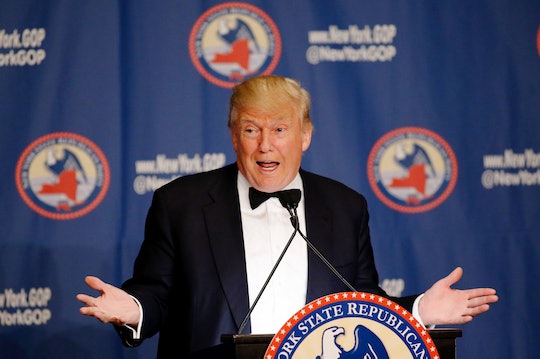 How Are Cruz & Kasich Going To Team Up Against Trump? They'll Figure It Out Later

Texas Sen. Ted Cruz and Ohio Gov. John Kasich haven't been able to stop Donald Trump's now seemingly inevitable march through the remaining primary states toward the Republican Party's nomination for president. It all hinges on keeping Trump from securing the 1,237 delegates he needs to win the nomination outright. Now the two candidates have come up with one, final hail Mary — coordinate their campaigns. So how are Cruz and Kasich going to team up against Trump? They're going to spend every resource they have on beating Trump, rather than each other. But the plan doesn't sound like it's got any better chance of working than anything else the two have already tried.

More Like This
20 Candid Photos Of Queen Elizabeth With U.S. Presidents Over The Years
25 Great Sci-Fi Movies To Watch As A Family
25 Great Kids’ Shows To Stream On Paramount+
20 Great Movies About Fathers & Sons That Will Make You Laugh & Cry

Late Sunday, the Cruz and Kasich campaigns released coordinated statements outlining their plans. Cruz will focus solely on winning as many delegates as possible in Indiana, where he polls most strongly against Trump. And Kasich is going all in for Oregon and New Mexico. The two campaigns are essentially mathematically eliminated from winning 1,237, so the best either candidate can hope for is acting as spoiler for Trump. Probably not the presidential campaigns of either Cruz or Kasich's dreams, but desperate times and all of that.

Here's a bit of the announcement.

But Trump is running strong and looking to pick up a significant number of delegates in Tuesday's Republican primaries in Maryland, Pennsylvania, Deleware, Connecticut, and Rhode Island. He's the presumptive nominee as it stands and something major is going to have to shift to keep him from winning all the way to the convention.

"To ensure that we nominate a Republican who can unify the Republican Party and win in November, our campaign will focus its time and resources in Indiana and in turn clear the path for Gov. Kasich to compete in Oregon and New Mexico," Cruz Campaign Manager Jeff Roe said, according to CNN.

Kasich strategist John Weaver laid out a similar blueprint for this candidate's campaign leading up to the convention this summer in Cleveland.

"To ensure that we nominate a Republican who can unify the Republican Party and win in November, our campaign will focus its time and resources in Indiana and in turn clear the path for Gov. Kasich to compete in Oregon and New Mexico," Weaver said, according to CNN.

Leaders within the Republican party, often referred to generically as the "Republican establishment" are concerned that if he wins the nomination, not only would Trump be a weak competitor against a far more seasoned, battle tested, and presidential Democrat front runner and former Secretary of State Hillary Clinton, but it could hurt the party in other races too. If Republicans stay home on election day in November, Trump's poor showing wouldn't just lose the White House for the GOP, it might also put ticket Congressional races in jeopardy and hand the party cascading, devastating losses down to the state level. It's doomsday scenarios like that that have caused the Republicans to come up with this Kasich-Cruz coordination scenario the likes of which even Wile E. Coyote might see as dicey, at best.

Let's assume Kasich and Cruz are able to win enough delegates to keep Trump from 1,237. What then? Both are candidates who inspired little-to-no enthusiasm from their own party and likely wouldn't be able to win enough votes to beat Clinton. Plus, there are going to be a whole lot of pissed off Trump supporters who think the system is rigged if the nomination is snatched away from him at the convention. That would cost the Republicans the only emotional momentum they have in this election cycle. But still, emotional momentum of any kind is crucial in elections.

Trump, for his part, predictably responded to the Cruz and Kasich campaign coordination with a series of tweets that read like they're written for third graders.

Trump might not be a great choice for president, but the guy's got a real point. Cruz and Kasich teaming up is a little desperate. But, for now, they're the best hope the GOP has to keep Trump from being the nominee. Voters will have to wait and see how effective the strategy is. But it's hard to envision a scenario where everyone in the GOP doesn't lose one way or another, regardless of the outcome.