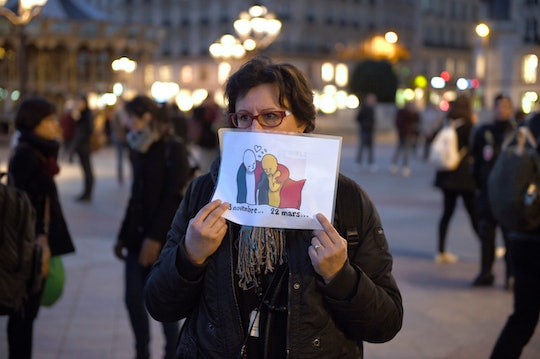 How Are The Brussels And Paris Attacks Similar? Some Grim Parallels Have Already Emerged

The series of deadly explosions that struck Brussels early Tuesday morning left dozens of people dead and many more injured, leaving scenes of terror and chaos that reminded many of the aftermath of the Nov. 13 attacks in Paris. And while few details have been released about the investigation into the explosions that hit a subway station and major airport in the Belgian capital, one question investigating authorities may have is how the Brussels and Paris attacks are similar, as any parallels could offer clues to the motives behind the recent bombings — and whether similar attacks might be forthcoming.

Early Tuesday morning, three explosions hit the main airport in Brussels and a subway station in the suburb of Maalbeek, according to multiple news reports. Some 26 people were reported dead and more than 130 were wounded in the bombings, CNN reported. And while no suspects had been named in the assaults on the Belgian capital in the hours following the explosions, as of Tuesday morning government officials in Belgium and the United States were already using early evidence from the blasts to draw clear parallels to the ISIS-led attacks that tore through the heart of Paris last November.

During a televised early morning broadcast, CNN international correspondent Nima Elbagir reported that the biggest similarity between the two assaults was that, in both cases, the attackers targeted a series of what authorities called “soft targets,” non-military sites where high numbers of civilians were known to congregate, but with low official or police presence. In Paris, the attackers focused on high-traffic areas including restaurants, a concert hall, and a stadium.

Early reports of evidence gathered from the Zaventem airport and the Maelbeek metro station point to other grim parallels between the two assaults. The BBC reported that at least one assault weapon was discovered at the Brussels airport, and eyewitness accounts confirmed that shots were fired in addition to the two explosions. According to a separate BBC report, multiple types of weapons were used in the Paris attacks.

And as of Tuesday, Belgian officials were already beginning to draw connections between the possible suspects behind the attacks, according to Elbagir. The bombings in Belgium occurred just days after state authorities arrested Salah Abdeslam, the man believed to be behind the Nov. 13 Paris terror attacks. During the live broadcast, CNN reported that Belgian authorities believed they had “shaken the hornet’s nest” by taking Abdeslam into custody and warned that it could “press fast forward” on any potential attacks that he or his co-conspirators might have been planning.

To be clear, the Paris attacks stand apart in multiple, critical ways: at least eight attackers hit multiple sites throughout the city in what some have called the most sophisticated assault by ISIS so far, according to CNN. More than 130 people died in the Paris bombings and at least 350 more were injured, making it the most violent event to happen in France since WWII.

But authorities have made it clear that the timeline that followed the November assaults in France will not be repeated in the Belgian capital, according to Elbagir. During the CNN broadcast, she reported that Belgian officials were concerned about leaking details of any possible suspects identified early in the investigation or possible connections to the arrest of Abdeslam in Belgium last week.

The lesson they learned post-Paris is that the information that was out there in the public domain was used by Salah Abdeslam and his co-conspirators to evade capture. They believe that. So now, this time around, they’re being very, very wary about what is put out there into the public domain because they don’t want a repeat of that manhunt that dragged on for weeks and months.

Details of the attacks in Brussels are still unfolding. So far, no terror organizations have come forward to claim responsibility and no suspects have been officially named.