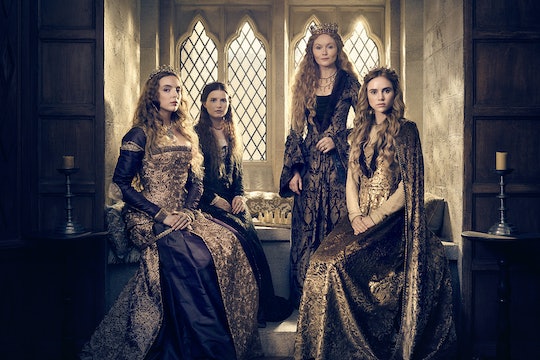 'The White Princess' & 'The White Queen' Are Connected

Starz's The White Princess is easily one of the most anticipated new shows of 2017, largely thanks to its obvious similarities to Game of Thrones (albeit without all of the fantasy trappings and with direct historical elements). The upcoming show is based on the historical novel of the same name by Philippa Gregory, who also wrote The White Queen, another book that was adapted for television. Given the similarity of the names, many viewers are wondering — how are The White Princess and The White Queen connected?

The White Queen was a 10-part British miniseries (starring Rebecca Ferguson as the titular queen, Elizabeth Woodville) that aired on BBC One in the United Kingdom and Starz in the United States back in 2013. The one-season drama was based on the fictionalized historical events (set during the time of the Wars of the Roses, from the women's point of views) retold in Gregory's novels The White Queen, The Red Queen, and The Kingmaker's Daughter. Each of the three novels that formed the basis of The White Queen is part of Gregory's The Cousins' War series of novels.

The White Princess serves as a direct sequel to The White Queen — the novel that the new show is based on is the fifth in the Cousins' War series, chronologically following the three that informed the plot of The White Queen.

Though the new series is technically a sequel, it seems to be fairly distinct from the earlier BBC show (despite the fact that the two shows have the same showrunner and writer, Emma Frost). Some of the same characters (historical figures) will appear in the upcoming show, but none of the same actors are returning — the role of Margaret Beaufort, the King's mother, for instance, was played by Amanda Hale in the first show and will now be played by Game of Thrones' Michelle Fairley. For all intents and purposes, it's a fresh start on a continuation of the old story.

The White Queen ended with the battle between Henry Tudor and King Richard III, Elizabeth of York's lover/uncle, in which Richard III died and the "White Princess" had to marry into the House of Tudor — her family's enemies — in order to secure a tenuous peace. According to Deadline, The White Princess picks up just three days after the conclusion of The White Queen, "as a new generation ascends to the throne in a tale of power political divides, family, love, and betrayal."

If you're still a little shaky on the history and the who's who/what's what of it all (to be fair, there are a lot of characters with the same name), the Starz video below on the history behind The White Queen might clear some things up as you head into The White Princess. It shouldn't be too hard to just jump straight into the new show without having seen the old, though — as with any historically-based drama (The Crown, for one), you can kind of pick up on the historical background as you watch.

With its focus on the women "behind the scenes" of one of history's most tumultuous times, The White Princess will surely be one to watch and become your next new obsession.