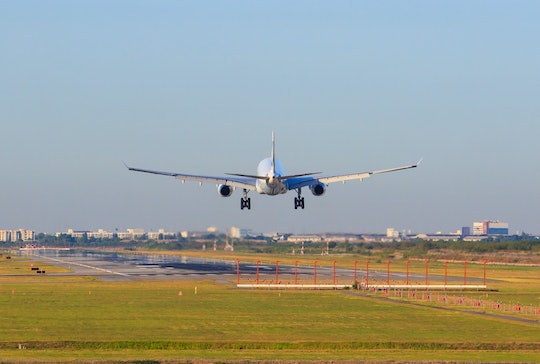 If there's one thing to be thankful for this Thanksgiving, it's that according to U.S. officials, there are no immediate terror threats facing the United States at the moment. And considering the events that have unfolded in Paris and other countries abroad over the last few weeks, that's at least of some comfort. But as Americans head into a major holiday weekend, and travel plans close in, it's easy to be left wondering just how much security will be at airports this Thanksgiving holiday. And, according to multiple reports, the Transportation Security Administration (TSA) will be stepping up security measures at airports across the U.S. in the coming days (phew!), resulting in longer lines and wait times (oof).

Despite how things may be on this side of the Atlantic, the threat in other countries remains. Officials in Belgium warned about an "imminent" threat of a terrorist attack over the weekend. The Guardian reports that schools, shopping malls, and sports events in the country would be closed. Here in the United States, however, we have been spared this type of scare in the wake of the Paris attacks, and travel has continued as normal. But that will change come Thanksgiving. Though previously, according to The Los Angeles Times, two law enforcement officials said extra security at American airports would not be implemented, Homeland Security Secretary Jeh Johnson said Sunday that efforts will be "doubled down" during the holiday. And, because of that and the high traveler volume during the holidays, travelers should expect longer lines.

Also, on Monday, the U.S. State Department issued a warning for U.S. travelers, telling them to "be aware of immediate surroundings and avoid large crowds or crowed places." Though the alert lacks specifics — and seems to indicate an overall call to be cautious, rather than a specific threat — it's still an indication that authorities are taking the threats seriously. Said the department in a worldwide alert:

Authorities believe the likelihood of terror attacks will continue as members of ISIL/Da’esh return from Syria and Iraq. Additionally, there is a continuing threat from unaffiliated persons planning attacks inspired by major terrorist organizations but conducted on an individual basis.

The tight security comes after Islamic State militants released a video on Thursday that included threats of an attack on New York City and a Nov. 15 video that threatened an attack on Washington. Despite all this, the chairman of the House Intelligence Committee said on Sunday that there is no "credible" terrorist threat against New York, according to USA Today. The Department of Homeland Security had a similar message on Friday, saying that there is no current credible threat to the United States.

According to Reuters, The Transportation Security Administration (TSA) "declined to comment about possible heightened security measures," and federal officials have been "mum" about extra airport security measures during Thanksgiving travel. But individual airports are implementing their own protocols. There will be extra canine patrol units at Atlanta's Hartsfield-Jackson airport, and at Douglas airport in Charlotte, there will be more police personnel. Additionally, The Port Authority of New York and New Jersey confirmed on Thursday that all of its facilities, including John F. Kennedy, LaGuardia, and Newark Liberty airports, will be on “heightened alert,” according to the International Business Times.

Also, there is extra security still being implemented from the TSA's response to last month's downing of a Russian Metrojet flight. At that time, the TSA asked for airports to implement additional screenings of overseas passorts. "The threat level continues to be the same as it was last month," a security consultant told the Times on Friday.

Still, "Everybody wants to go home and have turkey and be with their family and friends, and everybody's going to be just a little bit nervous," Nancy McGuckin, a travel behavior analyst, told Reuters.

It's easy to see how extra nerves could contribute to an already hectic travel situation. According to a survey released last week by AAA, nearly 47 million Americans will be traveling for Thanksgiving this year, which is an eight-year high. That's a lot of travelers. Hopefully, travel jitters will be kept in check.