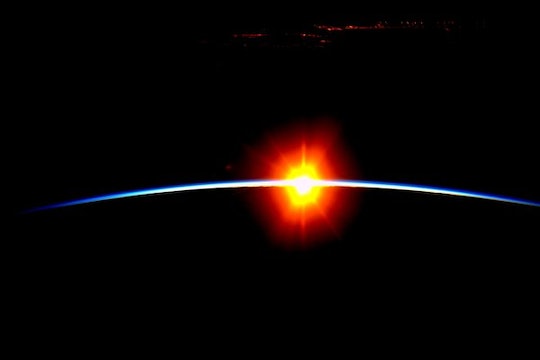 How Astronauts Celebrate Thanksgiving in Space

The International Space Station isn't exactly known for its Michelin stars — anyone who's ever eaten freeze-dried astronaut ice cream from their local science museum gift shop can relate. ISS Commander Kelly — who has already been in space a total of 216 days and counting — got a gentle ribbing from his brother Mark, fellow NASA astronaut and husband of former Arizona Representative Gabby Giffords, about the "gourmet" Thanksgiving meal offerings on board the International Space Station:

Ever wondered how astronauts cook a Thanksgiving meal in space? Wonder no more!

"Pass the salt" takes on a whole new meaning when you're gobbling up turkey in zero gravity:

Even from 250 miles above our planet, the ISS crew sent their Thanksgiving well wishes to us Earth-dwellers below: