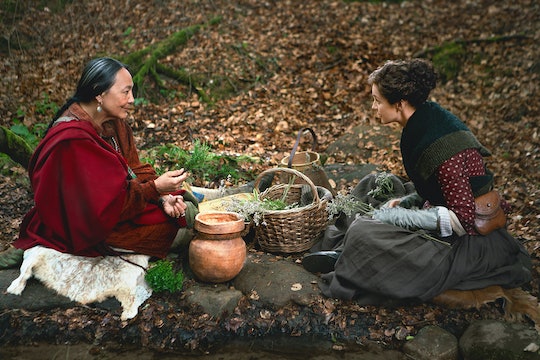 Native American Characters Will Be Introduced In 'Outlander' Season 4

By traveling to America in Season 4, Outlander has had to grapple with racial issues that it only skimmed the surface of in previous seasons. The show has faced criticism for how it handled race in the past because everything is filtered through the perspective of the white protagonists, who are not the people actually affected by slavery and colonization. These sensitive topics have to be approached with care and authenticity. But how authentic is the portrayal of Native Americans on Outlander?

The first photos of the show's Native American characters were recently released to RadioTimes. Executive producer Matthew B. Roberts also spoke to the publication about how important it was to be as truthful as possible in their portrayal of Cherokee and Mohawk Nations. "Every department, from production design to costume and hair and make-up, does a huge amount of research to ensure we create a world that feels authentic to the time and place," Roberts said.

He continued, "To build our Native American world, they have learned traditional techniques, from canoe building to hand weaving and, to populate that world, we have welcomed a great team from Canada to play both the speaking and supporting roles of the Cherokee and Mohawk Nations in Outlander Season 4."

It's impossible to determine just how accurate the show is until the episodes air, but "authentic" is a word that often comes up when the Native American characters are discussed. In another interview with Entertainment Weekly, Roberts spoke about the Mohawk village set that they created in a public park in Scotland, where the show still films despite its American setting. Roberts said:

It's funny. Scotland has a right to roam, so we couldn't actually close the park. You can only ask people to wait while we film. It's an authentic Mohawk village that's populated with people in costume. I remember a few dog walkers coming around the bend on a trail. They looked around like, "Wait a minute, what just happened?" It's almost like they touched the stones and went through time.

But despite the attempt to be faithful to the real people being depicted, Cherokee and Mohawk Nation actors won't be portraying the Cherokee and Mohawk Nation characters. According to EW, "roughly 200" First Nations actors and extras from Canada were flown into Scotland to play the parts. CheatSheet reported that executive producer Maril Davis explained why during an appearance at PaleyFest.

Canada didn't have union rules, which allowed the show to employ over a hundred First Nation actors. Davis also told Vanity Fair that Roberts flew to North Carolina to discuss the season with "one of the Cherokee leaders." She continued:

Unfortunately, there are many story lines in this book that are not necessarily so flattering to Native Americans. We're sticking to the source, but we also want to be sensitive to the Native Americans [and] show things from their perspective as well, so it doesn't seem so one-sided.

It seems like Outlander is trying to be accurate and thoughtful with their Native American characters, but only time will tell if the show succeeds.