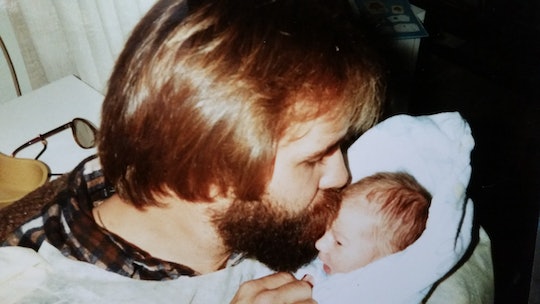 How Becoming A Mom Fixed My Broken Relationship With My Dad

Growing up, my parents often referred to me as "strong willed." Well actually, my dad would mutter something about being a "pain in his ass," but what that really meant was that I had a strong opinion about everything. I wanted to have a say in everything we did: what movie we saw, what song was playing on the radio, and what restaurant we went to. My mom dealt with this bold character trait the way she dealt with everything: with a smile. She always looked on the bright side and decided I was destined for greatness. My father, on the other hand, was fed up with my opinionated nature because it interfered with his opinionated nature. We were cut from the same cloth, but he was never thrilled to debate his teenage daughter over which restaurant we'd go to to for dinner. What he considered disrespect, I considered a difference in opinion — and my strained relationship with my dad has affected every piece of my life. Even my own parenting.

When I was little, things were so easy. I looked up to my dad and thought he was the best dad in the whole world. He played catch with us in the front yard. He let me ride on that giant lumber cart at the hardware store. He even put a mattress in the back of his truck when we went to the drive-in movies. He was the kind of dad who always had something goofy to say and could somehow fix everything. Our early childhood memories together are filled with trips to Disneyland, listening to Tom Petty in his GMC truck, and hiking together at our cabin. Then something awful happened: I grew up and became a teenager. Everything changed, and our relationship went from piggy back rides to screaming matches.

It took me getting pregnant and becoming a mother for me to finally understand my dad better, and for him to get to know an all-new side of me.

My teenage years were much different than my childhood. I was insecure, moody, and everything made me mad, especially everything my father did. He didn’t say the right things, I didn’t answer him in a “respectful tone,” and we argued nonstop. Hormones and boys only added to the riff in our relationship, causing us to butt heads like bulls over just about anything. My mom, the ever-positive peacemaker, would try to mediate our fights. “He’s a good dad. He loves you and he is doing the best he can,” she'd tell me, defending him. But I just couldn't hear it. Nothing helped our relationship and we continued to drift apart as the years went on. Even after I got married, my dad and I continued to bicker over trivial things. My husband would even step in to defend him. “He loves you,” he’d say after an argument that left me in tears. But I didn't hear it.

Honestly, it took me getting pregnant and becoming a mother for me to finally understand my dad better, and for him to get to know an all-new side of me. When I gave birth, my whole world was flipped upside down. I quickly learned that parenting was nothing like I'd pictured. There was no white picket fence to hide behind and to my surprise, no parenting manual to follow. There were no answers — I had to find them for myself. I suddenly had this precious life to shape and mold and protect and care for, and the amount of pressure I felt was a shock to my system.

Holding this fragile little baby made me think of my dad holding me so many years ago. I wondered if he had the same emotions I had. Fear, insecurity, and an indescribable amount of love. Watching my dad hold my son for the first time brought me great joy. I no longer felt like an irresponsible teenager feeling judged by her father — I felt like the mother of his grandchild. I was so proud to be a mother, and he was proud to be my father. He was still the same man, but softer and more compassionate. I was still the same feisty, opinionated girl, but more gracious and forgiving. My perspective had changed. So had I. And so had our relationship.

Unlike his own dad, he never abandoned me. He never gave up on his family, not even when I disagreed on where to go for dinner. Our relationship was not perfect, but it was fixable.

I knew my parents loved me, but I had no idea how much they loved me until I held my own baby. My heart exploded with a love I'd never felt before. Suddenly, worry was now a part of my daily life. I stressed about every decision I made and how it would affect my child. I didn’t want my children to grow up and have to overcome their childhood, and this realization made me wonder about my own dad's childhood.

My dad may not show love the way other fathers do, but the point is that he shows it by being there for me, no matter how hard things get.

Surprised at how little I actually knew, I asked my mom to tell me everything she knew about my dad's childhood. And I quickly realized it was nothing like my own. When my dad was just 8 years old, his dad walked out on him and my grandmother had to raise and provide for four children by herself. My dad, because he was the oldest, carried a heavy burden. He had three younger siblings, and the youngest was only 2 years old. He went from a care-free kid to the new man of the house. Though he tried to reconnect with his father later on in life, the relationship was never quite what it should have been. My dad, a very rough-around-the-edges kind of guy, was shockingly kind and forgiving of his father. And, when he died at a fairly early age, my dad was crushed. I didn’t know my grandfather so my memories were scarce, but I was left with endless questions: What would life been like if his dad stayed? Would my dad have been a different boy? A different man? A different father?

I’ve learned that there are no perfect parents. There is no guide book showing us how to parent the right way. All we have are the example set before us and the motivation to give our children the kind of life we feel they deserve. My dad didn’t have a consistent role model or an example of unconditional love. His father didn’t play catch, or push him around the hardware store. He was taught that when the going gets tough, you leave. He learned that when people need you the most, you abandon them. But unlike his own dad, he never abandoned me. He never gave up on his family, not even when I disagreed on where to go for dinner. Our relationship was not perfect, but it was fixable.

I suddenly saw my dad through a parent's eyes. I saw him as a little boy who needed to be loved. I no longer saw a man who was impossible to deal with, I saw a man who cared. I no longer saw a father set to ruin my life, I saw a father doing the best he knew how. My dad may not show love the way other fathers do, but the point is that he shows it by being there for me, no matter how hard things get, by sending me texts, after one glass of wine, about how proud he is of me. He shows his love for me with sarcastic comments, irritating teasing, and by finally letting me pick the restaurant... sometimes. My dad shows his love by being there, always, no matter what.

Becoming a mother was one of the best things to ever happen to me. It had a profound effect on me. I love deeper than I ever thought possible. And I learned to see my dad for the man he truly is: human. We all have our flaws, but love, I've realized, is about looking past those flaws. Love is seeing my dad as the man who never left, despite the example set before him. Love is accepting our relationship the way it is, messy and imperfect, but full of love. Becoming a mother not only added a new piece to my heart, it also repaired a part of my heart that belonged to the very first man I ever loved. And I'm so thankful it did.