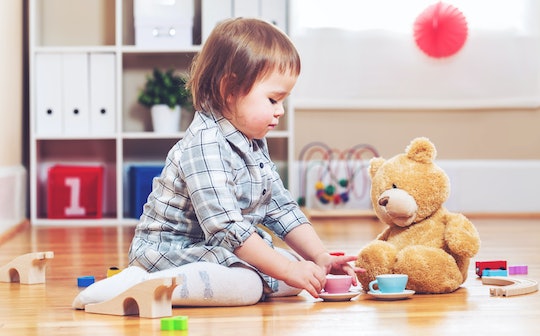 Passive parenting, aka, or at least related to, permissive parenting, is a parenting style that gives your kids a lot of freedom and few boundaries or much discipline. It can sometimes seem like a very tempting way to do things because it lets your kids learn and explore on their own, making mistakes along the way that they can then learn from. On the other hand, however, like any parenting style, it can affect your child's life for years to come, so if you're thinking of applying it, you might want to know how passive parenting affects your child later in life.

No — or low — discipline over the course of an entire childhood can, unsurprisingly, have an affect on the way your child grows up and the kind of older kid, teen, and, ultimately, adult that they may grow up to be. Every child is different, however, and some kids crave rules and structure more than others. "For those kids who really needed structure and didn’t get it, you kind of see them acting out more and rebelling even though the parents don’t have a lot of rules on them, they kind of go further and further to see if there is a boundary," Kelsey Torgerson, a childhood anxiety and anger management specialist, tells Romper. "So you might see teens who stay out all night, or drinking, or are engaging in sexual behaviors and that’s not condoned by their family. At times you can see them having a hard time holding down a job, succeeding at school, those kind of environments where there’s more structure and more rules and more expectation." If they aren't exposed to structure and guidelines at home consistently and from an early age, it can be difficult for them to understand how or why they're expected to act accordingly in a school or work environment.

"The child that has little setting of guidelines throughout grows up to be the adult that tends to make up their own rules or thinks that the rules don’t apply to them," pediatrician Dr. Jarret Patton warns Romper. However, for some kids, more passive, hands-off parenting styles can be quite beneficial. "They can often grow up thinking that there are no boundaries, which, in some instances, can spawn their creativity and their problem solving," Patton says. If you have to be independent and think critically about how you're going to do things or solve problems as they arise, it might encourage you to develop those skills more acutely.

Additionally, Torgerson says that she thinks that passive parenting can be beneficial at times. "What I really love about it as a parenting style is that, since you’re not so discipline-oriented, you really recognize that kids make mistakes and kids need to learn ... so for some kids it can be really beneficial because they’re given that opportunity to grow and develop and explore on their own and kind of figure things out, and so they can build independent skills. What’s important, though, is that they have one caretaker, one parent, or even a teacher who’s stepping in if they’re going too far outside of the boundaries of what would be OK and safe."

Working with your kids to establish freedom in some situations and boundaries in others helps them know that it's OK for them to make their own choices and figure things out for themselves, but also makes sure that you know (and they know) that there are boundaries (and what they are) and consequences, still, for straying outside of them. While it might not be a great idea for parents to opt to be nearly completely hands-off, you need to know your kids and what they best respond to and also be willing to change things up and step in with some rules and expectations if need be.