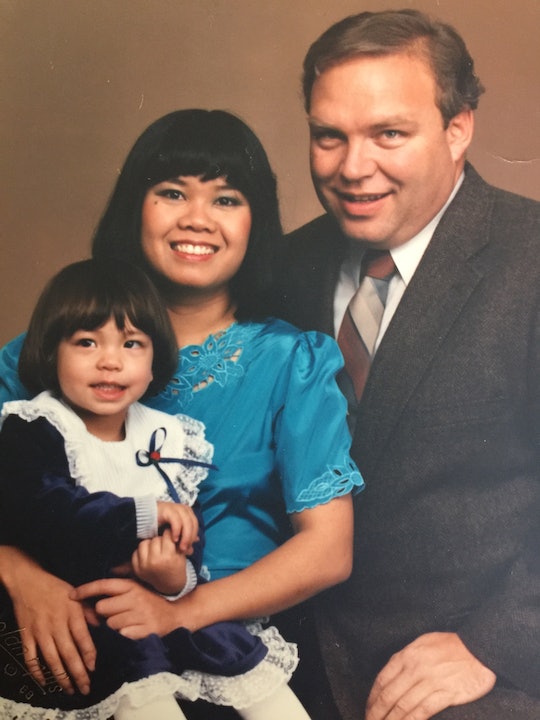 How Being Raised By An Immigrant Made Me A…

The majority of my childhood was pretty privileged. I grew up attending piano lessons, figure-skating training sessions, and playing tag on a relatively well-kept playground down the street from my two-story home. As a teen, I was enrolled at the local high school — a sprawling, hedge-trimmed high school campus that was middle-class and predominantly white. When the school bell rang at the end of the day, I'd rush home to stuff down some dinner and head downtown for my nightly ballet class, where I was training to become a professional principal dancer, because that's just what good kids from good neighborhoods did. In many ways, and because of those things, I'm now a well-adjusted adult. I'm also the child of an immigrant mother.

My mother too grew up privileged, compared to some of her schoolmates in Lampang, the capital city of Lampang Province in Northwestern Thailand, which is situated just under 60 miles southeast of Chiang Mai, far from the bustling metropolis of Bangkok and the picture-perfect beaches of Phuket. Her father — my late grandfather — owned a logging company there, which meant that he and my grandmother and their 11 children could comfortably afford a large family home, several cooks, a maid, and a butler. My mother used to tell me stories about how she'd gather in the kitchen with the cooks at dinner time to watch them stir large pots of bubbling soups and woks with steaming noodles — how she'd had more pets than she could recall, including several large birds, dogs, and a monkey at one point.

It would have been easy enough for the family to pass on some sense of wealthy entitlement to their children, but strangely enough, my grandparents did just the opposite: On nights when new workers had no place to go and little to eat, my grandfather would invite them back to the family home for a hot meal of rice, curried chicken, and fresh fruit. After their bellies were full, he'd offer them a place to stay and let them live there until they were back on their feet financially, which never took long. My mother watched this and learned from it.

It never occurred to me that I was different growing up. Certainly, from the day she brought me home from the hospital, my mother never taught me that the color of my skin or the way my eyes were shaped made me lesser than the other kids at school. My friends were black, Hispanic, Asian, and Native American, from mobile home parks and the fancy-looking houses down the road — and all of them were welcome for sleepovers at any time.

When she wasn't busy studying with tutors, taking traditional Thai dance lessons, or visiting family at the local Buddhist temple, my mother was 100 percent busy being a wild nuisance to the neighbors — hosting grasshopper and cricket fighting matches with her brothers, terrorizing her older sisters, or generally disobeying my grandparents. Once during monsoon season, when she was still young, my grandfather warned her to stay away from the flooding river, and when she returned home, soaking wet and with only one sandal, he scolded her severely.

My mother likes to brag that she was her father's favorite, that he used to call her his "little Wan" and tell people that she would grow up to become a doctor, married to another doctor. She only ever broke his heart once: the day she told my grandparents she was leaving them to finish school in America.

When I left home, choosing to give up a budding career as a ballet dancer in search of an education, she pushed me, the way she had learned to push herself when she crossed oceans in search of something.

My mother was just 17 years old when she stepped off the plane into the busy airport terminal in Los Angeles. She was small and shy, and didn't know very much English, and it took her even longer to finally meet up her host family in Idaho Falls.

From there, she lived out something of a typical American college experience, transferring schools and majors until she found one with a respectable arts program, graduating with her Bachelor's degree, and meeting a friend of a friend whom she initially hated, but who would later turn out to be my father — an Arizona Air Force brat who had sworn to his family previously that he would never marry a "foreigner." My father still says she was stubbornly independent — she had gotten that far on her own, and she'd finish it that way if it killed her.

It never occurred to me that I was different growing up. Certainly, from the day she brought me home from the hospital, my mother taught me that the color of my skin or the way my eyes were shaped did not make me lesser than the other kids at school. My friends were black, Hispanic, Asian, and Native American, from mobile home parks and the fancy-looking houses down the road — and all of them were welcome for sleepovers at any time. I distinctly recall her once offering a ride to one particularly aggressive playground bully, and in the car, his demeanor suddenly shifted — almost as if he felt allowed to be a child again.

The first time someone called me the N-word, then several more racial slurs until they landed on an appropriately Asian one, I went home and asked my mother about it. Rather than getting upset, she told me to ignore them and focus on my schoolwork. That same scenario played itself out over and over again for much of my childhood and adolescence: "slant-eyes" comments in the halls; bullies yelling "ching-chong" jibberish on the school bus; people asking if I had a dog and then, eventually, whether my mother had cooked it up for dinner. Whenever I opened my lunchbox and found curried fish, the other students would move away and begin mocking the smell.

For years, my mother's counsel was the same: Ignore them and remember that your heritage is important — it's different, and different is good. I only later learned that she had likely practiced that speech on herself, after facing the same discrimination, only multiplied.

By the time I hit adulthood, I was finally able to sift through the pieces of myself I'd gleaned from my mother, and found an inexplicable wealth of life lessons, all of which she had passed on to me without my knowledge. Instead of teaching me to separate myself into the proper skin-tone or class tier, my mother passed on to me the wisdom of building friendships with those less fortunate and those who were different, the way her father had invited disadvantaged workers into his own home. When I left home, choosing to give up a budding career as a ballet dancer in search of an education, she pushed me, the way she had learned to push herself when she crossed oceans in search of something.

When I pretended to be more Caucasian than I was, or acted as if my heritage was a black mark on my social life, she reminded me that everything she and her parents had worked for was not to give up their ethnicity for a homogenous, white-picket fence, but to shine a spotlight on it and to show the rest of the world what it meant to be Thai.

As an adult, I sometimes feel threatened by my mother's success — her ability to leave everything behind and build something important has always made my accomplishments look tame in comparison. But I don't think that's what she intended, and I've learned in time not to measure my mile-markers against hers.

In 2001, just days after two planes brought down the World Trade Center towers, my mother officially decided to become a U.S. citizen — but she never gave up her previous life or forgot her roots. When she was forced to miss her brother's funeral a few years later because of ballooning airline ticket prices and a overloaded work schedule, I was afraid that it might break her, but unsurprisingly, it seemed to serve as a motivator to pass on her own culture in a more dedicated way.

I don't consider myself religious, but knowing that they were connects me somehow to something bigger than myself. Small Buddha statues and incense line a shelf near my front window, reminding me to push myself each day to be better. It keeps me tied to the sort of energy that powers stars and makes up the blood in my veins.

People always say you grow to become your mother or mother figure, or your father or father figure, and maybe they're partially right. The cooking skills I've acquired over the years are sparse and generally wind up causing kitchen fires or burned utensils, but the few things I can make confidently are my mother's recipes for curried chicken, green curried fish, spicy ground pork and green beans, nam thok, nam phrik, and my brother's recipe for som tam — a papaya salad with chiles so hot they burn the roof of your mouth. Jasmine rice is a staple in my kitchen, as it was in my mother's.

I see my mother's heritage and her lessons come to life in the way that I dress (a mix of '70s school-kid tee-shirts airy enough to last through any monsoon season, and comfortable sandals that belong on the mat near the door when you enter the house), and the way I shop for groceries — "Don't buy that, there's a coupon for this other brand right here," is my Saturday mantra. Air conditioning is for 95-degree days only. Neither of us take ourselves too seriously.

My mother calls herself Christian these days, but in her childhood, her parents were Buddhist. To this day, she remembers her father sitting in silent meditation sessions. My cousins, at least a good handful of them, were Buddhist monks at one point, fully draped in orange robes. I don't consider myself religious, but knowing that they were connects me somehow to something bigger than myself. Small Buddha statues and incense line a shelf near my front window, reminding me to push myself each day to be better. It keeps me tied to the sort of energy that powers stars and makes up the blood in my veins.

There's a vicious debate circling the political pool at the moment, over whether immigrants crossing oceans or borders to flood into the United States will destroy it or make it a better place. I can't speak for everyone, of course. But I tend to believe that, if they're anything like my mother — and I believe they are — the latter is the only reality worth taking into consideration.