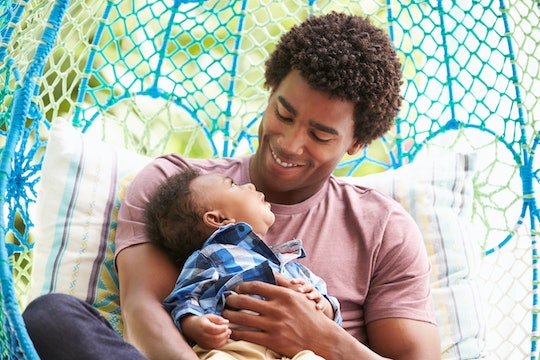 5 Easy Ways For Dads To Bond With Their Little Babes

There is a lot of research out there about the importance of a mother's bond with her baby, and as a result, dads can sometimes feel a bit left out in this department. But with Father's Day coming up, there are some ways dads can bond with their baby, and some new data, that may interest parents. According to a new study published in the Journal of Obstetric, Gynecologic, & Neonatal Nursing (JOGNN), it's just as important for dad to be involved. The study suggests that successful father-infant bonding during the immediate postpartum period has been shown to have several benefits for the infant. Namely reducing cognitive delay, promoting weight gain, and improving breastfeeding rates.

And in yet another study, according to Science Daily, researchers looked at how fathers interacted with their babies at 3 months of age and measured the infants' cognitive development more than a year later. They found that babies whose fathers were more engaged and active when playing with them in their initial months performed better in cognitive tests at 2 years of age. Nice work, dads.

And mom, this post is for you, too. In an article for Time magazine, researchers said lack of involvement from new fathers may be caused by “maternal gatekeeping,” a habit some mothers exhibit of controlling the access to and handling of a baby. While studies show fathers are more involved in the lives of their children now than they've ever been, the truth is encouragement from day one goes a long way. Food for thought as you venture out into this whole new world of parenting. And to all the new dads out there, Happy Father's Day with these five tips for bonding.