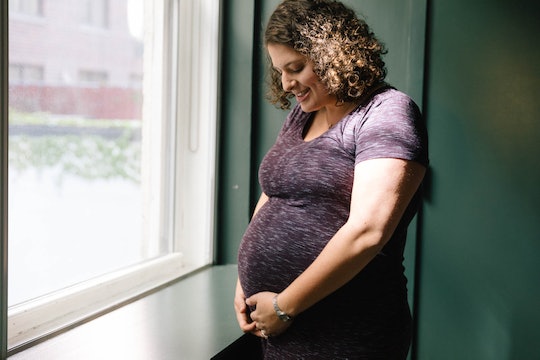 Hiccups are the absolute worst, aren't they? You want to scream about them, but you'd just hiccup more. When it comes to your little one though, they're kinda cute when your baby hiccups in the womb, right? But you might be wondering, how can I tell if my baby has the hiccups while pregnant or if they're just kicking around? Those movements are often hard to decipher.

Science has yet to come to a consensus for why anyone hiccups. Old wives' tales tell us that babies who hiccup in the womb may be hairy or stubborn. They might have red hair or be very shy. But what do hiccups really mean?

In the case of babies, at least in the first half of the pregnancy, researchers at Oxford have hypothesized that hiccups do serve a purpose for your little one. They've suggested that the forced jerky inhalation that occurs with each hiccup, along with the deep diaphragmatic pull accompanied by the inhale, forces amniotic fluid into the baby's forming tummy, and allows the enriched fluid to become a part of both the fetal and the maternal vasculature. They also hypothesized that this inhalation and swallowing of fluids helps regulate the pressure of the amniotic fluid and increasing the need for the fluid. The researchers suggested that it might be a sort of combination of regulation and growth promotion movement.

But how can you be sure? If you're trying to figure out if your baby has the hiccups in utero, you should note that researchers at The Journal of Maternal-Fetal & Neonatal Medicine found that women are pretty darned good at recognizing the differences in their baby's movements. According to The Bump (and also my own personal experience), baby's hiccups feel like short, rhythmic jerks that are a little like tiny jumps in your belly. With my pregnancies, my belly would twitch right along with the hiccups, which was only irritating during the 20 week anatomy scan when my daughter's hiccups almost prevented them from getting a good reading of her tiny heart, but thankfully, they subsided after a few minutes.

You may feel them several times a day in the first six months of your pregnancy, or not at all, according to Healthline. But, you should not be feeling those little baby jerks in your body every day after 32 weeks. That may indicate a very rare, but very real problem with cord compression and your baby. If you are feeling them past 32 weeks, you need to be seen by your provider just to make sure everything is OK.

It's pretty cute to think that your little baby is settled deep in your belly with a case of hiccups, unable to get a teaspoon of mustard to cure them. (I'm serious, it works.) But, if it persists into your third trimester, talk to your doctor. Until then, maybe you could try eating the mustard?