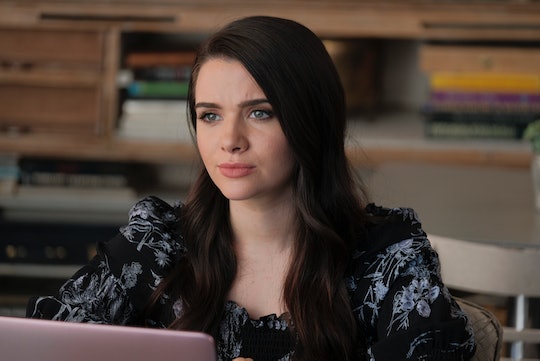 What The BRCA Gene Means For Jane On 'The Bold Type'

Last season on The Bold Type, Jane Sloan tackled work drama and romance, as well as a health issue that is now coming to light in a big way. After losing her mom to breast cancer, Jane was tested for mutations in her BRCA genes and tested positive. Because of this, Jane now has to make some very big decisions about whether or not she wants children. Ever. Though the story is fictional, the gene mutation's consequences are very real. So how can the BRCA gene affect fertility?

While there is no clear link between the BRCA gene mutation and infertility, the risks of ovarian cancers do increase significantly in women who test positive. There are two BRCA genes - BRCA1 and BRCA2 - and when damaged or mutated, they can indicate a potential cancer risk. BRCA1 gene mutations increase a woman’s risk of developing ovarian cancer by 44 percent, according to Cancer.gov, and women with a BRCA2 mutation are at an increased risk of 17 percent. When the risks of ovarian cancer are high, a woman’s fertility can be affected, and in some cases, doctors may need to discuss future reproductive prospects and challenges.

So how does a BRCA gene mutation increase the risks of developing cancer? The National Breast Cancer Foundation explains that while every human (man and woman) carries these genes, it is the mutation of the gene that puts a person at risk. BRCA genes produce proteins (called tumor suppressors) that help repair damaged cells, but when the genes have mutated, they are unable to produce the reparative proteins, leading to the growth of damaging cancer cells and tumors. And if your parents carried the mutated gene, you are at a 50 percent risk of inheriting it. The risks for developing breast cancer with these gene mutations are quite high, with a BRCA1 mutation resulting in a 55 to 65 percent increase, and a BRCA2 mutation leading to an increased risk of 45 percent.

Some women who test positive for a BRCA gene mutation elect to have preventive procedures in order to reduce their risks of developing cancer. In 2013 and 2015, respectively, Angelina Jolie opted to have her breasts and ovaries removed after learning of her BRCA1 gene mutation. In an op-ed for the New York Times titled Diary of a Surgery, Jolie revealed that her mother had battled cancer, which is why she was screened for the mutation in the first place. Despite not having a cancer growth in her ovaries, she still decided to have them removed due to her increased risk of ovarian cancer. “I will not be able to have any more children,” wrote Jolie, “I feel feminine, and grounded in the choices I am making for myself and my family. I know my children will never have to say, 'Mom died of ovarian cancer'.”

But BRCA gene mutation doesn’t mean you can’t have kids. It really depends on certain factors, including age, whether or not you are ovulating, and your current health. This is why, noted Extend Fertility, women with BRCA gene mutations are given options like egg freezing, which can still result in a normal pregnancy, even if the Fallopian tubes and ovaries are removed. So, even with a BRCA gene mutation, it is possible to still get pregnant.

In The Bold Type, because Jane is still a young 25-year-old, her doctors are giving her the option of having a baby now instead of later. As she gets older, there could be the possibility she will need her ovaries removed, so she is now faced with making this huge life decision much earlier than she ever anticipated. Luckily, Jane has good friends along with Dr. Ben by her side, so she’ll have some support when she finally makes her decision.

The Bold Type airs on Tuesdays at 8 p.m. ET on Freeform.