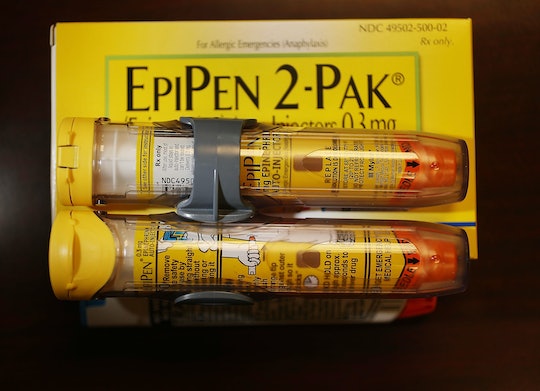 How Can You Get Cheaper EpiPens? Mylan Expands Programs To Help With Costs

Media revelations about the skyrocketing cost of life saving EpiPens over the past week have cause a major backlash against pharmaceutical company Mylan. So now the company is cutting the price and expanding discounts to more American families who rely on the pens to fight extreme allergies, particularly in children, which can be life threatening. How can you get cheaper EpiPens? Mylan has expanded programs to help with costs.

Mylan bought the right to the EpiPen in 2007, and since then has raised the price of its auto-injectors by more than 400 percent, to nearly $500 out-of-pocket for some American families, according to Forbes. The EpiPen isn't anything new. It's hasn't really been improved much since it was invented in 1977, so why the huge price hike? It's what Bloomberg calls, according to Forbes, "A textbook case in savvy branding." Mylan did not respond to Romper's request for comment regarding the price increase or the reasons behind it.

One of the brand's most recognizable faces, actress Sarah Jessica Parker, who has a son who uses EpiPens for his peanut allergy, has decided to end her relationship with Mylan as a result of the pricing controversy. Here's her statement from Instagram:

The revelations of price gouging of American families by a pharmaceutical company also triggered swift reactions from both Congress and presidential candidate and former Secretary of State Hillary Clinton, who released a scathing statement calling on Mylan to do something to help families afford the life saving drug.

"That's outrageous—and it's just the latest troubling example of a company taking advantage of its consumers," Clinton said, according to CNBC. "It's wrong when drug companies put profits ahead of patients, raising prices without justifying the value behind them."

Members of Congress, like Minnesota Sen. Amy Klobuchar, joined Clinton in condemning Mylan, who she sees as profiting off of a monopoly on a life-saving drug.

"This outrageous increase in the price of EpiPens is occurring at the same time that Mylan ... is exploiting a monopoly market advantage that has fallen into its lap," Klobuchar, whose daughter relies on an EpiPen, said, according to CNBC.

Mylan's competitors, Sanofi's Auvi-Q and Teva have both been taken off the market. Auvi-Q was recalled, and Teva failed to secure regulatory approval, giving Mylan and its EpiPen a total monopoly and Mylan the opening to charge whatever it wanted.

The public shaming of Mylan seems to have gotten the company's attention. On Thursday, Mylan announced it will slash the price of the pens in half, by offering a savings card that is good for $300 off a 2-pack of EpiPens and expanding eligibility for its assistance program to families living 400 percent above the poverty line, according to CNBC. Mylan will also continue to give schools free EpiPens and will work to let parents fill their prescriptions directly through Mylan, bypassing the pharmacy, which the company says will reduce costs.

But rather than talking about the company's pricing strategy, Mylan CEO Heather Bresch released a statement laying the blame for the high cost of her company's drug at the feet of a broken U.S. healthcare system. Bresch said, according to the company's press release:

Patients deserve increased price transparency and affordable care, particularly as the system shifts significant costs to them. All involved must also take steps to help meaningfully address the U.S. health care crisis, and we are committed to do our part to drive change in collaboration with policymakers, payors, patients and health care professionals.

It's still unclear how the healthcare system is making it unable for Mylan to lower costs, especially when it has a monopoly on the market. But, the cost-cutting programs it is offering now are better than nothing for people who rely on its product.