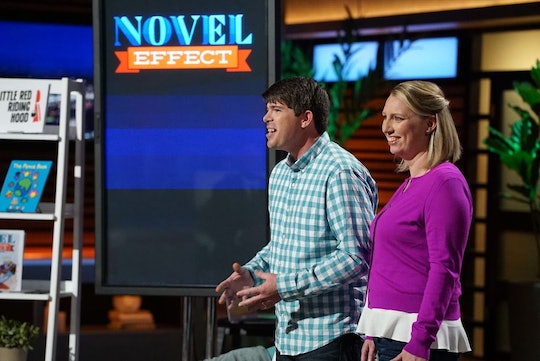 Sometimes the products pitched on the hit show Shark Tank are somewhat lackluster. The energy drink specifically marketed for older women who want to date younger men — Cougar Energy — comes to mind. But sometimes you just really want to own whatever it is the entrepreneurs are selling. Such is the case of a new product that will be featured on Sunday's episode called Novel Effect. So how can you get the Novel Effect from Shark Tank? The fun app is available on the Apple app store. And the best news? It's free. At least for now.

I know next to nothing about business and entrepreneurship, but Novel Effect seems to be a genuinely sweet idea. Using voice recognition software, the app will add in charming sound effects while you read to your child from their favorite storybook. For example, if you're reading about a gust of wind blowing, you might hear the app emit a gentle whoosh sound, while if you're reading about scary monsters, the app might give a fun grrr, which always makes children squeal with delight. The software also plays music that aligns with the theme of the story, like a light Parisian ditty for Madeline, or a playful, goofy tune to go along with something a little sillier like The Cat in the Hat.

On their website, the app's founders describe why they developed the product, and what they hope it will bring to parents or educators when reading to young children. "Good stories have always had the ability to captivate — to hold our hearts and imaginations within the spaces of each world — but today, books often lose out to flashier forms of entertainment," they write in the About Us section. It may be true that it's difficult for a book to compete with the glowing magic of an iPad, which is what makes this product so clever. And the sound-effects are particularly cool.

The creators of the product are Matt and Melissa Hammersly, who came up with the idea at the same time as the birth of their first child. At the baby shower, a friend read aloud to the group, and added her own sound effects. "With only her voice, she brought out the simple beauty of the book, adding sound effects for the wind blowing over oceans and trumpets announcing the baby’s arrival," the website describes. "The whole room fell in love with the book, and we knew if every parent could read in that way, every child would fall in love with reading."

With new and exciting entertainment technologies constantly coming out every year, many parents worry that they won't be able to convince their kids that reading is actually fun. Some studies suggest that as apps, television, and online games take center stage, kids' interest in reading for fun has been on the decline. An article in The Guardian sites a study by Scholastic that found that interest in reading takes a sharp nosedive after age eight. So, in this case, Novel Effect seems like a great way to combine new technology with a good old-fashioned book.

One app certainly won't solve the entire problem, of course. It's going to be a struggle for many years to turn the tide and get kids interested in reading again, especially after age eight. However, apps like Novel Effect could definitely set the stage for more reading later in life. As a lifelong bookworm myself, I am in favor of anything that gets kids interested in books as soon as humanly possible. Now, I just hope that the Hammersly family manages to impress the Sharks and get the business help they need.