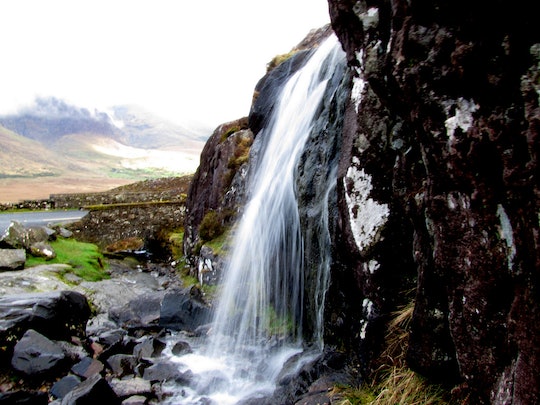 How Can You Tell If Your Water's Broken? It’s Not The Waterfall Hollywood Wants You To Believe

When I imagined my water breaking, images of fluid gushing out from between my legs filled my head. I pictured myself dripping wet or slipping on the copious amounts of fluid. I also assumed I would know when it happened. So imagine my surprise when, at 37 weeks pregnant, I suspected that maybe my water had broken but also I wasn’t quite sure (and Google wasn’t helping). I suddenly felt angry at the midwives at my birthing class for not teaching me how to tell when your water breaks and properly preparing me for this moment.

What I expected and what actually happened were two very different things. I was prepared for a deluge. What I got was a trickle. At the end of pregnancy, a lot of really weird things start coming out of your vagina (sorry, but it’s true). Between mucous plugs, bloody show, and just regular ‘ol discharge, there’s a lot going on. And if you’ve never been pregnant before, it’s hard to know what’s what. So when I woke up at 5:45 in the morning from a dead sleep feeling what seemed to be a little bit of gushing, I didn’t think it was anything different than what had been going on. I went to the bathroom, where some fluid continued to empty into the toilet after I was finished peeing, but it didn’t seem like all that much.

I called the midwife on-call at the hospital. “I think maybe my water just broke but I’m not entirely sure?” She told me to put a clean pad on and wait 30 minutes — if it was soaking wet, my water had broken. I did just that and, after 30 minutes, the pad was mostly dry. So I assumed it was a false alarm. Except that I was starting to have contractions, and they were pretty strong. Eventually we went to the hospital anyway, only to find out that I was five centimeters dilated. My instinct had been correct — what I suspected to be broke water actually was. (Lessons learned mamas — trust your instincts! They’re usually good!)

When your water breaks, your amniotic sac is rupturing. The amniotic sac is what holds (and protects) the fetus in utero. The fluid that leaks out when your water breaks is the amniotic fluid. While Hollywood may have prepared your for an unexpected rupture in the grocery aisle, that’s not necessarily going to happen. According to What To Expect, only 15 percent of women experience the rupture of the sac before contractions or labor begin (I guess I was one of the lucky ones). For many women, it happens when they’re already in labor.

As for what it feels like when it happens, that totally depends on the person. BabyCenter has a collection of anecdotes from women who describe the feeling of their water breaking as anything from a trickle to a gush to a feeling of relief to absolutely no feeling at all. When your water does break, that doesn’t necessarily mean that you need to get to a hospital right away, either (though, in my case, it did). If you think your water may have broken, the best thing to do is pick up the phone and call your provider, who can tell you what to do next.