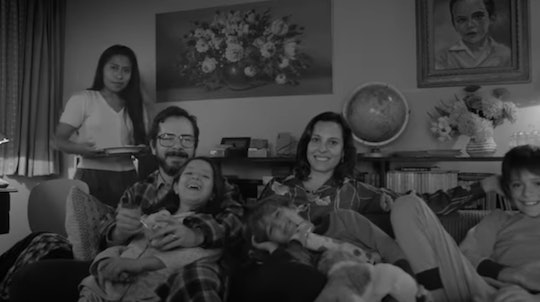 How Can You Watch 'Roma'? It's Easier Than You Might Think

Oscars Sunday is upon us and movie buffs are scrambling to watch their favorite films. With eight movies nominated for Best Picture, they have their work cut out for them. Because that's a lot of couch time, popcorn, and bathroom breaks. But if you're looking to do things relatively simply (and still want to catch the best of the best), you're definitely going to have to seek out Roma — a black and white, Spanish language film from an acclaimed director that actually lives up to the hype. So, how can you watch Roma? It's easier than you think.

Let's start with the basics. Roma follows the life of a young housekeeping living and working in Mexico City, according to Rotten Tomatoes. Through vivid imagery and emotional storytelling, a beautiful film about the domestic strife and the strength of women and families comes to life.

Right now, Roma is back in a very select group of theaters for a limited time during awards season, so you might be able to see it at your local movie theater.

However it won't be at Regal Cinemas or AMC Theaters, according to the Los Angeles Times. That's because Netflix failed to keep the movie in theaters for 90 days, the industry standard, before movie it to their streaming service. Both chains said, in statements, that since the movie wasn't shown in its theaters, it wouldn't be part of their pre-Oscars lineups, the Los Angeles Times reported.

To be nominated for an Oscar, a film must show in theaters for seven days in a row in a commercial movie theater located in Los Angeles County (pretty specific, no?) and run at least three times a day, with one showing during peak evening hours, according to CBS News.

Your best bet to see it in a theater is likely to check out independent movie theaters who may be more likely to show the film. Check movie ticket websites like Fandango and Showtimes for local listings.

If you have trouble finding it in theaters, however, your next best bet — and perhaps the easiest course of action — is to watch it on Netflix.

To do this, you'll need to have a subscription, of course. Just don't try and borrow someone's username and password. Netflix is wise to the game, and is cracking down on it, according to The Independent. But right now, Netflix is offering a 30-day free trial for new users, according to the company's website.

One more thing before you watch — Indiewire suggestions turning off you television's motion smoothing feature so you get a better quality with this crisp, black and white movie.

The films director, Alfonso Cuarón, knows his way around the Academy Awards. He won Best Director in 2014 for the film Gravity, starring Sandra Bullock and George Clooney, according to The Hollywood Reporter.

Bottom line, don't miss out on seeing this film. Dozens of wins and nominations can't be wrong.

More Like This
How To Watch Elf In 2022, Including A 24-Hour Marathon
All The Nights The Grinch Airs On TV In 2022
Disney Introduced Its First Openly Gay Teen Character In Strange World
20 Of The Best Christmas Movies For Kids