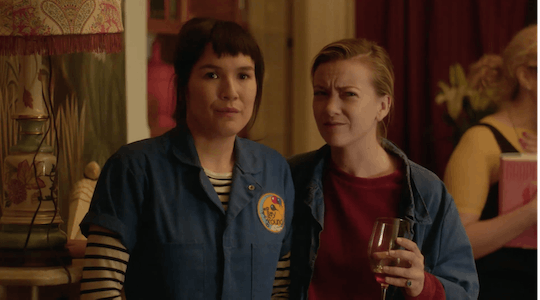 Here's How To Watch 'Strangers

Strangers returned this summer for a second season with extended episodes that push Mia Lidofsky's web series into the realm of a real half-hour dramedy format. But potential viewers who've heard buzz about the show may be wondering: how can you watch Strangers? It's been called the queerest show of 2017, so, naturally, it's on an untraditional platform. Instead of going the network TV route, Lidofsky wanted to maintain creative control as the creator, director, and writer of the series loosely based on her life. And with the first season containing bite-sized episodes (around 15 minutes each), a big name streaming platform like Hulu, Netflix, or Amazon was a little out of the team's reach.

So, with the help of Refinery29 as a producer backing the project, the series was acquired by Facebook Watch, which is Facebook's take on its own in-house streaming service. The idea is to serve viewers on a platform they're already visiting all the time and in a setting that's already built for discussion around the content. If you go to the Facebook page for the show, you're automatically directed to its Facebook Watch channel, where you can stream all of Season 1 and Season 2 as episodes release once a week.

The series premiered its fully produced first season at the Sundance Film Festival in January of 2017; Facebook acquired it later that spring. Strangers then debuted on Facebook Watch last September with new installments of the seven-episode first season dropping once a week. Following its finale, Facebook announced that it had re-upped the show for a second season, which dropped earlier this summer. In addition to the new extended episode format, the show made another huge shift between Seasons 1 and 2: it moved from Los Angeles to New York.

Strangers follows Isobel, played by Zoë Chao, a woman who finds herself unable to make rent once her boyfriend moves out after discovering she's cheated on him with a woman. To make up the cost, Isobel rents out her spare room on a fictionalized version of Airbnb, introducing a rotating cast of characters who each touch Zoë with the fleeting intimacy of home-sharing. (They are the titular Strangers of the series.) With each new guest, Zoë comes to learn something about herself as her sexuality and dreams of ditching her mommy blog editing job to become a real writer come into focus.

Chao is joined by Meredith Hagner, of Search Party fame, who plays Cam, Isobel's lesbian best friend. While Isobel struggles with all the usual baby-queer feels, Cam is, of course, the one to whom everything comes easily, from finding dates to landing gracefully on her feet in a gorgeous apartment when the pair move cross-country. Isobel, meanwhile, plays the ukulele at kids' birthday parties to make ends meet and still can't make rent, so she transitions from host to guest, opting to Airbnb-hop full-time instead of renting an apartment. (Which, girl, if your life was unstable before having a permanent home base, wait until you see what couch-surfing does your level of chaos.)

In an interview with Variety, Lidofsky confirmed that, away from major network or streaming executives, there was a little more leeway to tell a story like hers authentically. "I do feel that the extra room has allowed me to grow in what I hope are major ways. I really, truly believe in the stories we’re telling this season," she said. "It’s more inclusive, it’s more diverse, we’re exploring things a little more deeply while keeping the same tone and humor of Season 1."