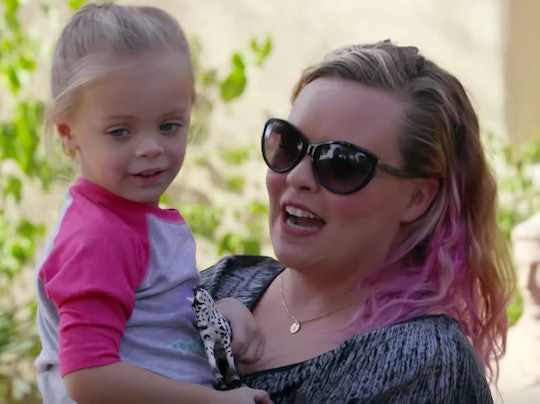 This past week, stars of MTV's Teen Mom OG, Catelynn Lowell and Tyler Baltierra, had some very special news to share: they're expecting their third child together! Fans of the show, who have been watching Lowell and Baltierra since 16 & Pregnant, couldn't have been more thrilled to hear the news. But nothing tops how Lowell and Baltierra's daughter reacted to their pregnancy news. Needless to say, she is so excited that she gets to be a big sister very, very soon.

Little kids are so unpredictable — you never know what they're going to say next or how they're going to react to some pretty major news (like that they're getting a younger sibling). However, Lowell and Baltierra's daughter, 3-year-old NovaLee, handled the situation perfectly and adorably.

In a preview for the new season of Teen Mom OG, Lowell didn't tell her daughter that she was going to be a big sister in an extravagant way. Instead, Lowell did it while she and Nova were making cupcakes, according to Us Weekly, letting her know that they were baking for their sex reveal party.

"Mommy has a baby in her belly," Lowell simply tells Nova. Her reaction to the news is priceless; she didn't freak out or panic. Instead, Nova looked over to Baltierra, who made a funny face at his daughter, and the smile on Nova's face once she figures out exactly what's happening will make your heart melt.

Even though this will be airing during the new season of Teen Mom OG, fans can see the exact moment that Nova found out that she was going to be a big sister on Us Weekly's website.

In the clip, Nova also revealed that she hoped that she would have a "little sister", according to E! News, but would also be happy if she had a little brother, too. "And does it go away?" Nova asked her parents in the clip. So she might be in for a rude awakening once the baby arrives, although she quickly changed her mind about how she felt about the baby.

Talk about the cutest reaction ever.

Fans won't see this play out on their televisions until the new season of Teen Mom OG airs on Oct. 1, according to E! News. But in the meantime, there is a lot to know about Lowell and Baltierra's soon-to-be-new addition to their family ahead of the show's premiere.

Lowell revealed to Us Weekly that she and Baltierra are a little uncertain about their baby's sex, but will be happy no matter what. Lowell said, according to Us Weekly:

And judging from the clip, it seems like Nova is happy either way, too.

Fans who have been following Baltierra and Lowell since the first season of 16 & Pregnant are likely to be just as excited. It's hard to forget their story — after Lowell got pregnant for the first time at the age of 16, Lowell and Baltierra decided to give up their daughter, Carly, for adoption, according to E! News. But this didn't hold back the couple, who had been dating since middle school. Instead, the couple welcomed Nova into the world on Jan. 1, 2015, and married just a few months later, according to Us Weekly.

They've also had their fair share of struggles — both Lowell and Baltierra have been very open about their battles with depression, according to Us Weekly, and earlier this year, Lowell suffered a miscarriage, which was documented on Teen Mom OG. Because of this, the couple's resiliency and will to keep going has inspired MTV audiences for years, which makes this recent news all the more exciting.

"We love being parents and can't wait for our newest addition," Lowell told Us Weekly.

It's clear from this new clip that Nova feels the same way and can't wait to be a big sister.