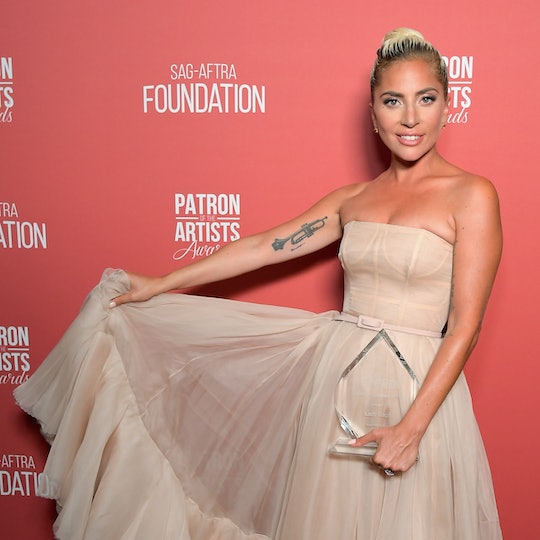 Along with her unique fashion choices, Lady Gaga is known for her versatile, award-winning talent. Her experience in music and acting have made for a pretty full trophy case. But just how close is Lady Gaga to an EGOT? Well, she has a bit of a ways to go before she can join the slim list of show business superstars who have reached EGOT status. To do so, she would have to take a foray into theater — which I would be totally okay with, BTW.

For those not in the know, an EGOT is a collection of top awards from the categories of television (Emmy), music (Grammy), film (Oscar), and theater (Tony), according to People, and it’s considered to be a sort of "grand slam" of show business. Only a select few stars have landed all four. While the various awards have been around for much longer, the term only dates back to 1984 when Miami Vice's Philip Michael Thomas said it in an interview with the Associated Press.

Only 12 people hold EGOTs, including Bruce Springsteen, Whoopi Goldberg, and Audrey Hepburn, as Vogue reported, but many stars are close. The massive success of A Star Is Born has many wondering if this will be the year that Lady Gaga wins an Oscar. Should Gaga do so, she will be that much closer to EGOT status.

Numerous outlets have speculated that both Lady Gaga and Bradley Cooper will receive multiple nominations for the 2019 Academy Awards. Variety reported that the pair have been nominated for Golden Globes as well, and Gaga won this award for her performance in American Horror Story: Hotel. Unfortunately, this award doesn't count towards the EGOT designation.

In order to achieve EGOT status, Gaga will have to win not only an Oscar, but also an Emmy and a Tony. She currently holds six Grammys, according to Pop Sugar. However, in order to win a Tony, she will have to either act or write for Broadway. Considering her varied talent and apparent ability to fit in just about anywhere, I wouldn't count her out of the Broadway scene just yet. Her ability to act and sing simultaneously would serve her well on a Broadway stage.

While an EGOT may be Gaga's ultimate goal, her next step is certainly to win an Oscar. A Star Is Born was a resounding success, racking up $382,406,727 worldwide and $42,908,051 on its opening weekend alone, as Box Office Mojo reported. Along with high earnings, A Star Is Born also received five Golden Globe nominations, according to NBC News. Among the five nominations, was a Best Actress nomination for Lady Gaga. And while the Golden Globes don't count towards the EGOT, they often serve as a prelude for Academy Awards nominations.

If she does go on to be nominated and awarded an Oscar, Lady Gaga will be in a unique position. People reported that an Oscar win would not only push Gaga closer to joining the short list of EGOT stars, but closer to becoming the youngest title holder. As of now, Robert Lopez — co-creator of The Book of Mormon and Avenue Q, as well as the the songwriter behind Frozen — earned his EGOT in 10 years. But Gaga is shortly behind him.

Lady Gaga is quickly rising the ranks in show-biz and nearing epic EGOT status. Once she gets an Oscar under her belt, a transition from the screen to the stage is in order. Only time will tell if Gaga makes the move to get an EGOT within her reach, but in the mean time she has plenty to be proud of.