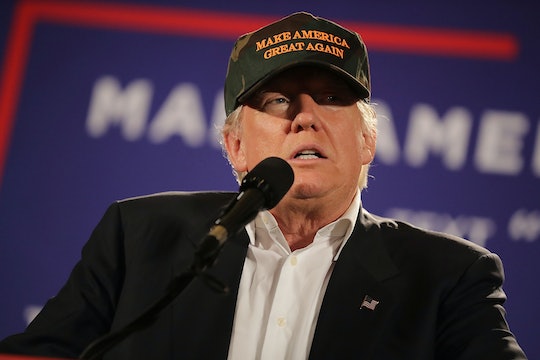 How Close Is Trump To 270 Electoral Votes? Polls Are Tightening & Dems Are Panicked

Polls are up and down, particularly at the national level. After weeks of looking like the Clinton campaign would have an easy cruise to victory, an FBI bombshell and some natural shifting of Republican voters back to Trump has put the race in a virtual dead heat. But it's not national polls that ultimately win the presidency, it's the state polls and electoral college maps that will determine who wins. So how close is Trump to 270 electoral votes? Trump has a narrow, but real, path to victory on Nov. 8.

According to the New York Times, nationally, Clinton holds 45 percent of likely voters compared to Trump's 42. According to Nate Silver, the statistics guru behind FiveThirtyEight, Trump's chances of an electoral college win is 29 percent. But polls in individual states, Silver wrote, like North Carolina and Florida, which are being hotly contested by both candidates, shows Trump gaining on Clinton, mirroring the national trend, according to Silver. Silver added that, while the presidency is won in the electoral college, states tend to follow national trends, meaning the uptick in Trump polling could spell disaster for Clinton. Silver also wrote that, if Trump is behind in the national popular vote by 3 to 5 points, there's no way he can win the presidency.

Trump's path depends on him flipping at least one reliably Democratic state to his side, which is why he's been campaigning in states like Michigan, Wisconsin, and New Mexico, according to CNN.

"The campaigns are interested in potential tipping-point states if the race closes to 50-50 nationally, not just where they are in the polls right now,” Matt Grossmann, director of the Institute for Public Policy and Social Research at Michigan State University, told the LA Times. “In a closer national race, Michigan should be competitive.”

The Clinton campaign is hoping to get a reliably Republican state to go their way. Clinton was in Republican-dominated Arizona this week trying to energize voters to get the state to flip to blue. The Clinton campaign has also made advertising buys in Virginia and Colorado, and bought ad time in New Mexico and Michigan for the first time since the primaries, according to the LA Times.

More traditional battleground states like Ohio, Florida, and North Carolina are also experiencing some tightening in the polls, according to CNN, and both campaigns are doing everything they can to shore up support and get out the vote.

But even though things are looking more competitive for Trump, the fact remains that he has a tough slog ahead.

“In the end, the popular vote isn’t what matters. It’s the Electoral College,” pollster Frank Luntz told Fox News. “And that Electoral College map is very difficult for Donald Trump, even though in every other indicator, it’s moving in the right direction for him.”