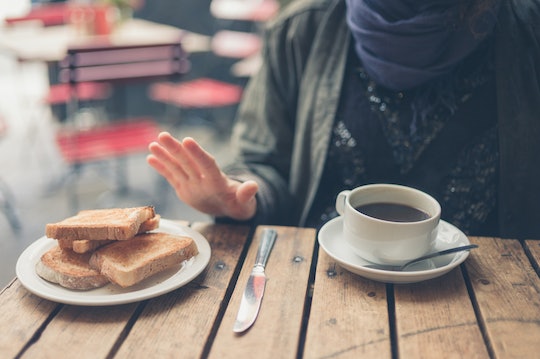 With peanut products banned in many daycares and kids' food products listing allergens, food allergies in kids seem to be on the rise. But children aren't the only ones who need epipens. How common are food allergies in adults? New research suggests that over 10 percent of U.S. adults suffer from at least one food allergy, a number that adds up to roughly 26 million people. But even more people think that they have food allergies when they don't — and that gap points to lack of medical treatment.

A study published in the journal JAMA on Friday looked at more than 40,000 adults in the U.S., asking them to report symptoms of a food allergy. As the research found, 19 percent of participants reported experiencing such symptoms, according to a statement released by the team of researchers. Roughly half of the symptoms were found to be the result of intolerances or other food-related conditions, meaning these participants didn't have food allergies at all. That left nearly 11 percent to be attributed to food allergies — findings that were generalized to represent the population of American adults as a whole.

The study's lead author Ruchi Gupta, MD, MPH, from Lurie Children’s Hospital, who also is a Professor of Pediatrics at Northwestern University Feinberg School of Medicine, explained in a statement that food allergies must be properly diagnosed, like any other medical condition, particularly considering the similarity with intolerance and other issues.

“It is important to see a physician for appropriate testing and diagnosis before completely eliminating foods from the diet," he said, according to The New York Times. "If food allergy is confirmed, understanding the management is also critical, including recognizing symptoms of anaphylaxis and how and when to use epinephrine.”

But despite the need for a proper diagnosis, Gupta and his team found that only half of the participants with verifiable food allergies had previously received diagnoses from physicians and less than 25 percent reported a current epinephrine prescription, according to CNN. Additionally, the team looked at how many participants did not develop their allergies until later in life, determining that nearly half of all food-allergic adults developed at least one allergy in adulthood.

The findings related to adult-onset allergies were perhaps the most shocking to Gupta. “We were surprised to find that adult-onset food allergies were so common,” he said in the statement. “More research is needed to understand why this is occurring and how we might prevent it.” Gupta's reaction is not all the surprising, considering the overwhelming amount of research devoted to child food allergies, he said, according to The Guardian:

We have been focusing efforts and concerns about food allergy in children, and this study is telling us there is a very significant burden of food-allergic disease in adults and we ought to be directing more attention and resources towards diagnosing and treating those adults.

Along with age, Gupta and his team collected data on the most common food allergies in American adults. According to a statement released by the team, shellfish was the most prevalent, (affecting 7.2 million adults), followed by milk (4.7 million), peanut (4.5 million), tree nut (3 million), fin fish (2.2 million), egg (2 million), wheat (2 million), soy (1.5 million), and sesame (.5 million). Shellfish allergies in particular persist across ages, Gupta said, and more information is needed to determine why that is:

Food allergies can pose a serious risk, and that risk is amplified when allergies aren't fully understood or properly diagnosed. Gupta's research underlines the need for additional studies into food allergies, as well as the importance of verifying suspected food allergies.