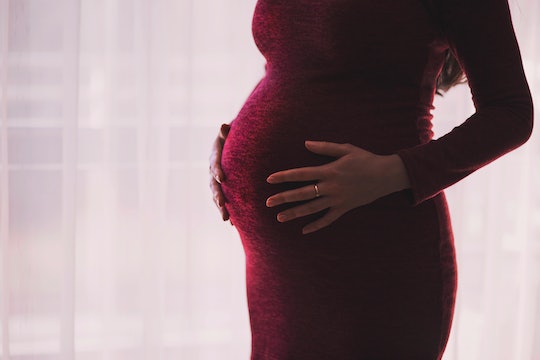 Not Knowing You're Pregnant Is Surprisingly Common

Before I got pregnant, stories about women who went through their entire pregnancies without even realizing they were pregnant made me irrationally afraid that I, too, might one day give birth suddenly after thinking I just had back pain or food poisoning. At the same time, it's pretty hard to actually imagine that it's possible to be pregnant without knowing it (especially if you've been pregnant and have felt very, very aware of it). But it obviously does happen — there is a whole reality show dedicated to it — so how common is it for women to not know they are pregnant? It's definitely rare, but not impossible. And yes, it really could happen to you.

According to The Huffington Post, an estimated 1 in 450 pregnant women doesn’t actually find out they are pregnant until at least their 20th week of pregnancy. That is pretty far along — the halfway point for a full-term pregnancy — and only a few weeks before viability, the point at which a baby has a reasonable shot at surviving outside of the womb. But that's not all: it's thought that as many as 1 in 2,500 women can be totally unaware of their pregnancies until they go into labor. The notion that you can go from thinking your aren't pregnant to literally giving birth and suddenly becoming somebody's mother is pretty terrifying. But the fact that it happens (and to more women than most people might realize) means that perhaps it's something that should be discussed a little more — especially because women who have experienced it have had to deal with a lot of judgment over why they didn't know.

In most cases where a pregnancy is detected late or missed entirely, it seems like women fall into one of two groups: either they had basically no symptoms of pregnancy at all, or they did and dismissed them as symptoms of a pre-existing medical condition, like endometriosis or fibroids. In an interview with Cosmopolitan, an anonymous Australian woman who didn't learn she was pregnant until she was already seven months along said that the fact that she'd suffered from stage-five endometriosis for four years meant that pregnancy symptoms like bloating, nausea, and weight fluctuations had become pretty common for her, and that she also wasn't having periods, so the tell-tale missed period that tips off most women also wasn't there to tip her off. She also lost weight as her pregnancy progressed, and was only 112 pounds the day she gave birth. And to top it all off, she was carrying her baby at the back of her uterus, which meant she didn't have a big pregnancy bump despite her small size.

Illinois mom Jennifer West has a similar story. According to Parents, West was on vacation when she began feeling unwell, and started experiencing intense cramping, but she'd suffered from fibroid tumors and ovarian cysts, and assumed that was what was behind the increasing pain. It was only after her husband insisted they head to the emergency room that the couple learned West was actually in labor, and was about to give birth to their son.

In West's case, her gynecological history also allowed her to misread the symptoms of her pregnancy. She thought she'd been getting her periods, but they were irregular, and looking back, it was likely that she wasn't actually having periods at all, but spotting, or another kind of light bleeding. And while most pregnant women would have felt their babies kick, West's tilted uterus meant that, to her, it likely felt like back pain — and although she did gain a fair bit of weight, she assumed she was "just getting fat."

Although these situations aren't something she sees often, British midwife Jen Mearns told The Daily Mail that she does see them, and that the explanations behind them are often the same. Mearns said that missed pregnancies happen most often with "busy women, and particularly as they approach the menopause," when they wouldn't be expecting it and are more likely to pass off symptoms as something else:

Medically, speaking, bleeding during pregnancy is quite common, especially during the first few months ... so women can think they are still menstruating. And as for the weight gain, lots of women yo-yo, and it's easy to put a few extra pounds down to eating too much. And not every woman puts on a lot of weight during pregnancy, or experiences other symptoms such as morning sickness.

Women who are taller or overweight tend to show much less, whilst menopausal women and younger busy women who are not expecting to be pregnant will just not be looking for signs. Even a baby's kicking can be mistaken for indigestion.

In some cases, it's also possible that pregnancies can be missed from pregnancy tests that yield false negatives — something referred to as cryptic pregnancies. According to the Cryptic Pregnancy Support Group, cryptic pregnancies occur when hormonal imbalances in the mother mean that there is "little or no detectable hCG" in her urine and blood. And since pregnancy tests rely on hCG levels for confirmation, even women who think they are pregnant will continue to get negative test results. According to The Huffington Post, birth defects could also lead to lower hCG levels, as could a "genetic quirk" in an otherwise-health fetus. High stress levels in the mother can sometimes also lead to lower levels of hCG being released.

But even women with normal hormone levels can be misled by false negatives: according to CBS News, women can test too early before hCG levels have risen, or the test was just plain inaccurate. And if a woman has never experienced a pregnancy before, and doesn't have the usual signs or feelings of movement, she just might not realize what's happening — especially if she wasn't expecting to conceive, or if she was told she couldn't. In fact, OB-GYN Dr. Kim Dever explained to CBS News that, though rare, delivering babies to mothers who had no idea they were even pregnant is part of her job. Dever said, "we do about 3,500 births a year, and we probably see this a few times a year."

Even though it's possible to not know you're pregnant, it's certainly not ideal or easy for anyone involved. Beyond the medical logistics, like missing out on prenatal care, or not realizing that you shouldn't be drinking, using drugs or taking other precautions you'd normally take, many women who have shared their stories have spoken of the incredible emotional difficulty of not having any time to psychologically prepare for parenthood, for essentially missing out on their pregnancies, and of feeling criticized and judged by others (including doctors and other professionals) who couldn't understand how they didn't know. Although the majority of women won't ever know what it's like to be oblivious to their own pregnancies, the reality is that it does actually happen — and that it's not even that difficult to understand why.