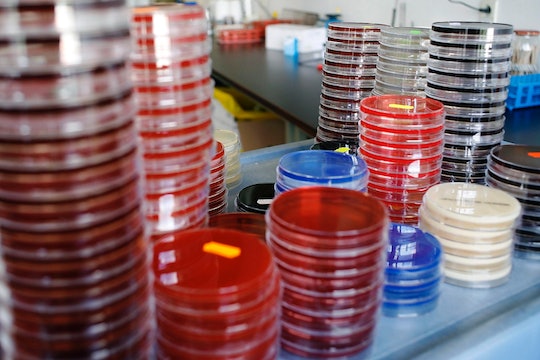 How Common Is The Superbug? The CDC Identified Fourth Case In US Patient

While it may not be the most talked about bacteria infection, a superbug is certainly one of the most dreaded. While people might not be as familiar with superbugs due to their lack of headline making news or commonality, recent reports show that a superbug might definitely be something to be scared of in the future. With a recent report from the CDC, people might start to wonder how common is the superbug — but will be happy to learn that it is not that common yet.

Before we know how common it is, I'm sure some people are wondering what is a superbug? When I hear that word, my mind instantly goes to a cute cartoon bug wearing a cape — but superbug is not that friendly and a lot more serious. Superbug, or mcr-1, is actually invisible to the human eye, because its a bacteria and not a physical bug. There can be many types of superbugs but mcr-1 is a strain of Escherichia coli that is resistant to last resort antibiotics — and was just found in one Connecticut toddler.

On Friday, the Centers for Disease Control and Prevention announced that they had detected a potentially deadly superbug in the fourth patient in the United States since May.

According to the CDC's release, the patient with the superbug had traveled to the Caribbean for two weeks to visit friends earlier in the summer where they caught the superbug. The bug was caught during an examination of a stool sample and the patient did not require hospitalization due to the bug. But according to CNN, just because the United States has only seen four cases of superbug doesn't mean that it can't become widespread. "As more surveillance systems with broader testing are established, it is anticipated that mcr-1 will be identified with increasing frequency," the report states.

Even healthy people can catch superbug. According to CNN, people can catch the superbug without feeling sick afterwards and that some can catch the bacteria simply through a small, superficial open wound. Despite the fact that superbug is resistant to last effort antibiotics, it should be noted that patients in the US have recovered from superbug, according to NBC News. The first US patient with superbug was a Pennsylvania woman who was diagnosed this past May.

This news of the fourth confirmed patient comes on the heels of the announcement that the UN General Assembly would hold a meeting to discuss antibiotic resistant bacteria, according to Scientific American. According to Scientific American, and Ezekiel Emanuel, chair of medical ethics and health policy at the University of Pennsylvania the meeting "is a clear recognition that this is a worldwide threat to everyone and worldwide action is what we need to address it."

According to NBC News, mcr-1 has the potential to pass to another superbug with different mutations that could form a true superbug and resist all known antibiotics. And according to CNN, superbug could kill 10 million people a year by 2050.

While superbug isn't quite common now, it doesn't mean that it won't be in the future. Thankfully, patients in the US have recovered from the bug and scientists are working hard to detect its source and stop it in its tracks.