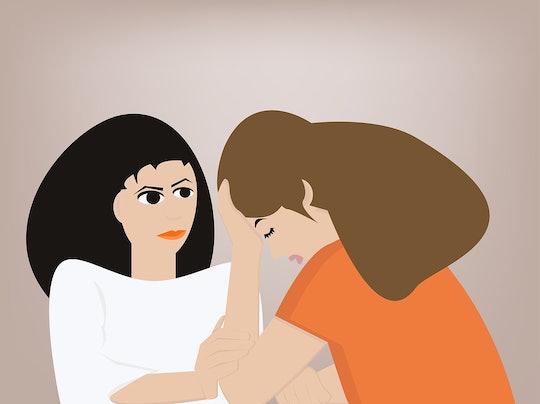 Is Couples Therapy The Key To Co-Parenting?

In a society that sometimes looks at therapy as taboo, it can be hard to reach out for help when you need it most. Sometimes you may not necessarily feel you need it, but would benefit from having it as a resource. Couples therapy is one of the most helpful outlets for any couple, especially for those maneuvering through new, uncharted waters, like co-parenting. In fact, there are several ways couples therapy makes you better co-parents .

When considering how hard it can be to maintain a relationship after the decision to split, co-parenting is an even more difficult addition to the situation. It can sometimes create more frustration and barriers when bringing stepparents into the mix.

According to Help Guide, "co-parenting, or having both parents play an active role in their children’s daily lives, is the best way to ensure all your kids’ needs are met and they are able to retain close relationships with both parents." Additionally, the quality of the interaction between co-parents can have a major impact on the mental and emotional well-being of children. So after a split, working through relationship issues to co-parent mutually is essential, and one of the primary tools to doing so is couples counseling.

In an interview with Romper, licensed marriage and family therapist Holly Hemphill of Hemphill Relationship Therapy says that couples therapy creates the ability to strengthen communication skills. She says learning to validate, active listening, empathy, and positive feedback generate ways to better relationships across the board, especially when co-parenting. And although people often look at co-parenting as one parent working together with the other parent after a split, a big part of co-parenting also includes stepparents as well, if they're in the picture.

In an interview with Romper, Julie Heckman founder of the group Stepmom Sisterhood, says her own experieince as a stepparent was made better through therapy. As a stepparent working together with her husband to co-parent with his ex-wife, she says:

Since [my husband's] kids were only 4 and 6 when we got engaged, we knew that handling co-parenting with his ex would be a huge part of our marriage and most likely one of the biggest sources of conflict between us. Counseling helped us figure out how we communicate best and also gave us tools to address situations as a team...

Heckman adds that one of the most important things she's learned using counseling as a co-parenting resource is to take a "backseat role," as the step parent, in tough situations between the co-parents. This, however, does not mean parents and stepparents shouldn't work as a team, but instead, try to communicate beforehand in a non-stressful environment.

Working together as co-parents means that there's no need to feel as if one parent is dictating the other's life after a split. And regardless of whether you're the co-parents, step-parents, or children in a situation, communication is key to keeping a healthy co-parenting relationship for the kids. In order to achieve the best level of communication in a co-parenting situation, turning to counseling is the simplest yet most helpful resource available.

More Like This
What Is RSV?
15 Weird-But-Genius Products For Breastfeeding Parents
If Breastfeeding Makes You Tired, Here’s How To Keep Your Energy Up
Endometriosis & Your Sex Life