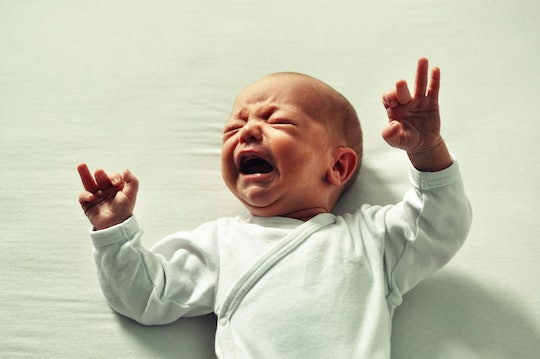 Experts Say Cry It Out Actually Changes Your Baby's Brain

With most infants crying for around two and a half hours a day while they’re between six and eight months of age, according to The Journal of Child Psychology and Psychiatry, it’s understandable that new parents often wonder if they’re trapped in a Shakespearean tragedy, crying out, “The baby does murder sleep!” in the middle of the night. Parents are invested in doing what they can to minimize the amount of time their child spends crying — for some, this means tending to their child whenever they stir, which can mean their babies continue to cry through the night for many months, though for brief periods, and for others, it means helping their baby learn to self-soothe, an approach that front-loads the amount of crying these children do and results in overall more sleep, as a 2016 study in Pediatrics found. But does the latter approach — letting your baby cry-it-out (CIO) — change your baby’s brain?

The stakes with this particular parental decision feel higher than with perhaps any other question of method, while it can be difficult to study the effects of the decision to sleep train, or to not sleep train — babies who present to clinics with sleep issues are already a poor control for the typical infant; even among parents who sleep train, approaches and circumstances can vary wildly; studies that look at the effects of “excessive crying” often don’t discriminate between babies who have sleep trained or not, and so on. Given that the main trigger for shaken-baby syndrome, also called abusive head trauma, is reportedly parental frustration with a baby’s crying and parental sleep deprivation can also increase the incidence of post-natal depression, per the Journal of Paediatrics and Child Health, there’s a strong incentive to find a way to help both parents and children have an easier time during their first several months together.

Some advocate the “Ferber Method,” or one of its variants, where parents leave their child to “cry it out” for limited periods of time. The American Academy of Pediatrics says cry-it-out is safe. Others say these methods are stressful for infants, and risk flooding their baby’s brain with the stress hormone cortisol.

"Some studies have shown that babies who do not cry it out are actually more content and independent; other studies have shown that babies are less stressed if they learn to settle themselves. After over twenty years of practice, I think the answer lies somewhere between," Texas-based pediatrician Lisa Lewis, M.D., author of Feed the Baby Hummus, Pediatrician-Backed Secrets from Cultures Around the World tells Romper.

"Every baby is different, there’s no one-size-fits-all policy for sleep training," she adds. And that is the experience of many parents.

Lynn Boyden, a mom of two from Los Angeles, used a modified version of the Ferber Method with her oldest child. As she recalls, her baby daughter started to sleep through the night starting at two months, and then when she began teething at eight months, began waking up in the middle of the night two or three times.

“After a few exhausting months I tried letting her cry for a few minutes in the middle of the night to see if she would go back to sleep and she did, usually, after a minute or two,” Boyden says. “ Of course, I kept waking up on her schedule, but hey, at least she was sleeping soundly.”

Tristen Schmidt, a mom of one from Alameda, California, who also takes care of children ranging in age from nine months to seven years and who hasn’t used Ferber or a variant of it, sees the matter differently. “Children who are left to cry learn that their needs will not reliably be met by others,” she tells Romper. In contrast, she believes that children whose cries are met with action by their caregiver “learn that when they have a need, they will be assisted.”

Rachel Morgan’s experience as a mother of four from Redwood City, California, lies in between Boyden and Schmidt’s.

“The only way that I’ve seen, in 20 years of working with children professionally and with my own kids, to get them to cry less is teaching them to more effectively communicate; to start, they use what they have,” Morgan said. “I think many adults forget that babies are people who cry because they can’t talk yet.”

For that reason, “When a baby in my care is crying, I pick them up and tend to them. I check their physical needs, and in general that solves the problem. Babies, in general, need to be fed, burped, cleaned, and held.

“For sleeping specifically, we’ve co-slept, or had our babies close by during the night. We all got so much more sleep, and I’ve gotten darn good at mixing formula or breastfeeding without fully waking up.”

Perhaps this wide range of individual experiences — and the wide range of mothers and infants — is the reason why research on how the infant brain responds to CIO have yielded such inconsistent results.

On one hand, a randomized, 12-month study published in Pediatrics in 2016 that tracked cortisol levels and number of night awakenings in 43 infants concluded that “brief behavioral sleep treatments may help young children sleep, yet do not lead to later emotional and behavioral problems, or later parent-child insecure attachment.” The study was the green light for the AAP to endorse sleep interventions.

The link between excessive crying at 11-16 weeks of age and sinus arrhythmia or elevated blood pressure later in childhood was examined in a PLOS One study published in May 2018, which found no link (notably, this was regardless of whether the parent had sleep-trained in early childhood). Both studies would seem to support those who argue that variants of the Ferber method don’t pose risks to the future physical well-being of children.

The 2016 Pediatrics study built on previous research published in the Archives of Disease in Childhood journal that found that “sleep intervention has the potential to lead to health gains for infants and mothers.” The participants were 328 mothers who were referred to clinics in Australia for infant sleep problems at 7 months of age.

On the other hand, breastfeeding advocates like La Leche League GB have challenged the methodology of the 2016 study, noting that cortisol readings were taken in the morning rather than at night, and that a generalized research paper from Harvard 1998 stressed infants’ needs for touch and attention, while a 1999 report from the Ontario Children’s Secretariat stated that “Early deprivation of social interaction, such as contacts with a mother,” could result in abnormalities in how the brain formed, and negative psychological outcomes.

Again, this report was not a study of cry-it-out, but spoke generally to the needs of infants.

In their 1999 report, the authors, Ontario’s Hon. Margaret Norrie McCain and J. Fraser Mustard found that “ongoing or chronic stress reduces… a child's ability to cope. The ability to tolerate stress or novel sensory stimulation is influenced by responsive care given in the early years.” This important takeaway can be taken as support for sleep interventions that reduce the likelihood of postnatal depression and result in a more responsive mother, or it can be interpreted as supportive of the directive to continue to intervene whenever a baby wakes.

What all infants share is a need for attachment and a need for sleep. How you achieve it will be something you work out with expert input, according to the needs of your unique and special baby.

Editor's Note: A previous version of this article did not meet editorial standards. It has been updated throughout.