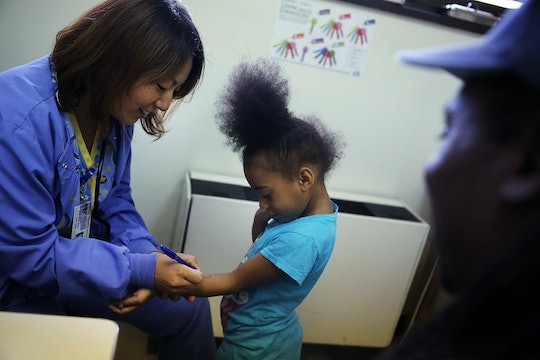 How Cutting The CDC’s Funding Will Affect Families

Since its implementation, the Affordable Care Act had made considerable strides in expanding healthcare access to millions of Americans. But the progress advanced by the ACA didn't only come in the form of provisions that banned discriminatory practices or mandated necessary services. Former President Barack Obama's landmark law also established a public health fund to help the U.S. Centers for Disease Control and Prevention combat preventable illnesses. The GOP's healthcare replacement bill, though, would deal a significant blow to the fund's budget, leaving Americans vulnerable disease. If you're curious how exactly cutting CDC's funding will affect parents and their kids, here are just four ways.

The Obama Administration created the Prevention and Public Health Fund in order to set aside monies for prevention and intervention programs that would ultimately lower healthcare costs. According to NBC News, the CDC uses the largest public health fund — which accounts for 12 percent of the agency's budget — for vaccination development and monitoring disease outbreaks, among other programs. The GOP's American Health Care Act (many are calling it "Trumpcare") would completely eliminate the PPHF by fiscal year 2019 onwards, although monies allocated for 2018 will remain. That means the CDC will lose access to nearly $900 million in funding, according to Stat.

Losing the fund will result in a significant increase in preventable illnesses and injuries.

The CDC uses money from the Prevention and Public Health Fund to support its Section 317 vaccines program. The 317 program helps deliver vaccines to states, provide doctors with enough doses for patients, offset vaccination costs for families who can't afford them, and respond to disease outbreaks, like the measles outbreak in Arizona last year. According to Vox, the vaccines program would lose half of its funding without the PPHF, which means parents and their children would become more vulnerable to diseases that the country has the science to prevent.

The United States' first mandatory public health fund also made it possible for the CDC to monitor disease outbreaks, NBC News reported. That includes the bird flu, Zika virus, yellow fever, antibiotic-resistant bacteria, and other diseases that have swept not only across America, but around the globe. Without the fund, the CDC would lose the money needed to not only mobilize responses to outbreaks, but to develop and deploy treatments to areas that have been ravaged by disease. This would most likely have the harshest impact on low-income and vulnerable communities.

Prevent Diseases That Are Major Causes of Death

The fund also helps the CDC's efforts to prevent and treat major causes of death in the United States such as heart disease, hypertension, cancer, and diseases. According to Vox, 80 percent of CDC funding earmarked for "evidence-based education and health programs about reducing the risk of heart disease" would be eliminated. That means less money for information, tests, and treatments. Removing money from programs that could keep you protected from preventable illnesses will put your health at risk both in the short- and long-term.

Parents and children who are admitted to or receiving treatment at a hospital or urgent care center are vulnerable to infection. According to the U.S. Office of Disease Prevention and Health Promotion, the most common types of hospital-related infections include pneumonia, urinary tract infections, infections at the surgical site, and bloodstream infections. The CDC used the ACA's public health fund to establish a program to implement prevention measures in hospitals to reduce infection risk, Vox reported. In fact, 100 percent of the CDC's budget for the program comes from the PPHF. The ODPHP reported that prevention practices can reduce the rates of hospital-associated infection by 70 percent, and save up to $31.5 billion in medical costs. Imagine what those numbers would look like without the funding to train healthcare professionals on disease control or test for infections.

It's clear that the Trump Administration doesn't have the best intentions of the health of Americans. Although Trumpcare does keep key parts of the Affordable Care Act, the bulk of the GOP's healthcare replacement bill will only make people sicker and sicker with each passing year.