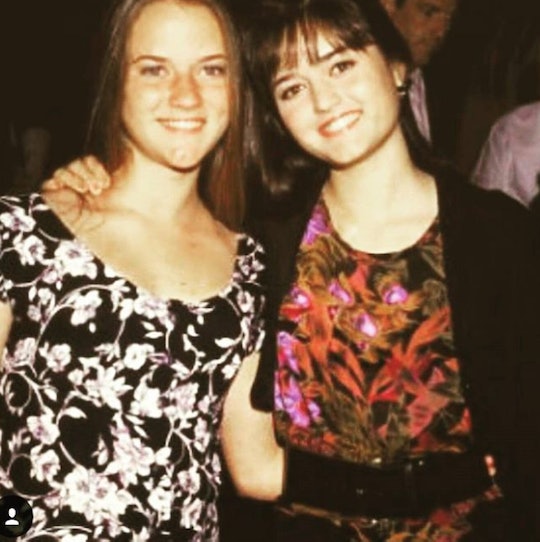 If ever there was an ultimate "girl-next-door" I think we can all agree it was Winnie Cooper from The Wonder Years. I mean, she's Winnie Cooper, the subject of innumerable adolescent first crushes with her dark hair and doll-like face that, let's be honest, hasn't changed all that much in the past couple of decades. I've always thought it must be odd to be the face of such an icon (especially as a kid), but Danica McKellar tells Romper she's nothing but grateful for The Wonder Years. Even though she gets recognized every single day (duh), each of these interactions is positive (but come on, who has anything bad to say about Winnie Cooper?).

That's not to say that McKellar was always so zen about being the eternal next-door-neighbor. While speaking with Romper, she admitted that when the show was still on and she was a teenager she was constantly recognized. So, like any bright and resourceful teenager would, McKellar devised a scheme: she and a friend were going to Disneyland — and they were going to go incognito. "So I put on a wig and I put on glasses and I gave myself a beauty mark," she says, laughing a little, "and my friend and I both spoke pretty good French so we spoke French, like, when we were standing in line." Alas, McKellar's is a face that cannot be mistaken, beauty mark or no beauty mark, and she still got recognized. "And I was so mad! I was so mad, I was like ugh."

Of course, it's been a long time since The Wonder Years, and McKellar has been quite busy. The first step towards reclaiming her own identity post-Winnie was getting her degree in mathematics from UCLA. McKellar has since written several math books — many of them aimed at girls and young women — with engaging titles like Math Doesn't Suck, and Kiss My Math. So clever, in fact, that they might even tempt me, a verified mathaphobe, to crack open a math book. It's never too late to learn long division, right? McKellar also adds that a lot of moms use her math books like Math Doesn't Suck to refresh their own math memories when helping their kids with homework. *Adds to Amazon cart.*

But math isn't all McKellar has been up to in the time since The Wonder Years went off the air. Acting-wise, the former teen dream has now found a home at Hallmark, acting in dozens of feel-good TV rom-coms over the years. And with her current Hallmark movie, Christmas at Grand Valley, premiering on Hallmark's Movies & Mysteries channel on Dec. 21, everything has kind of come full-circle for McKellar. You all remember Kevin's dad on The Wonder Years, right? Dan Lauria, who played Jack Arnold back then, has been reunited on screen with McKellar for the first time on Christmas at Grand Valley, where he plays — you guessed it — her dad. McKellar says that Lauria has been like a second dad to her since she was 12 years old, and they've always kept in touch and remained friends. So she describes working with him again on this movie as "incredibly special" and a "total time machine moment." No kidding. "And it happens on camera," she says. "You know when a camera zooms in and pulls back at the same time? Where you feel like, 'What planet am I on?'"

In fact, there is one scene in particular that all Hallmark and Wonder Years fans alike should pay special attention to. In the movie, Lauria plays a diner-owner in a small town called Grand Valley. McKellar's character, his big-city artist daughter, comes home to visit. McKellar describes the one scene that was particularly touching for her:

And I start helping him tidy up the diner after it’s closed. And he’s like, 'Oh you don’t have to do that.' And I say, 'You know what? I kinda like it. It reminds me of old times. It feels like old times.' And he looked at me and says, 'Yes, it does.' And he had this look and all that look is is: Wow this feels like back, 25 years ago.

And I am officially weepy now. I can't lie to you, readers.

A lot of actors find it hard to shake the first role that made them really famous — but I'd imagine that's been harder for McKellar than most. After all, it wasn't just The Wonder Years that was iconic, Winnie Cooper as a character has become a cultural touchstone — arguably outstripping even Kevin, the show's star. Speaking as someone still struggling to shake a few childhood nicknames, I'm a little awestruck by how graciously McKellar has found peace with The Wonder Years, and forged a (formidable) path all her own. So yes, I will definitely be watching Christmas at Grand Valley. Still iffy on the math, though.