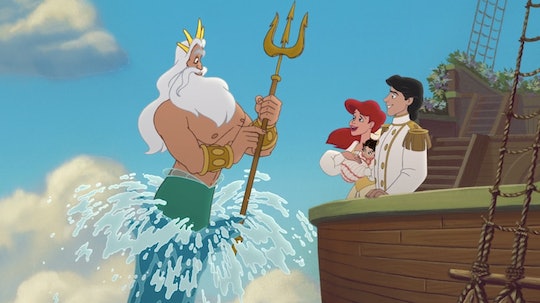 May Jafar (the returned version) have mercy on your sleep-deprived soul if you mistake Tinker Bell's friend Silvermist for Vidia. (Vidia is her frenemy, you absolute dolt.) These are the pieces of esoteric Disney facts and lore you learn almost by accident as a parent, because your child might not remember the name of their uncle who works as a diving instructor in Mauritius, but damn straight they know the full back story of King Triton — they've spent far more time in the company of the latter.

More Like This
What To Stream Right Now For Kids Who Love History
These Couches Are Perfect For Climbing If The Nugget Couch Is Sold Out
18 Best Sand Toys In 2021 For Babies, Toddlers, & Kids
Best Montessori Learning Towers: 11 Kitchen Helper Stools For Toddlers

Becoming a Disney-specific pop culture master is something that happened to me between watching Toy Story every day for two weeks straight and realizing, to my horror, that our library carried Pocahontas 2 and my daughter wanted to borrow it. Part of it is just constant exposure to the content, and part of it is survival, because the Sophia The First soundtrack is good and long. In the age of Disney+, you *will* come to know all the straight-to-TV sequels and obscure backstories for all your faves.

So just how deep are you into Disney lore? Give yourself a point for every piece of below trivia that you already knew. Warning: things get hairy in Disney's expanded universe...

How Did You Do?

Or, depending on how you look at it, extremely fortunate soul whose children haven't forced you to watch straight-to-DVD sequels.

You know about how Simba saved the Pride Lands the first time, and you're just going to assume things go a bit Empire Strikes Back in the sequel.

You've drawn a line from one Disney franchise to another, but you still don't know the deal with Jafar.

A laudable 7/10 theories you held about Frozen 2 going into the theater turned out to be plausible, thanks to all your knowledge of the Disney canon.

There are fans, there are super-fans, but you? You can draw the entire family tree from Mufasa and Scar on down. Congratulations/I'm sorry.