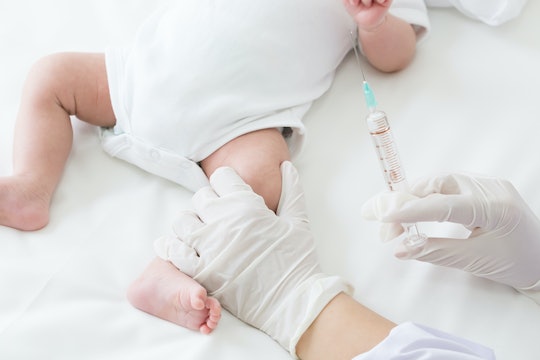 Nothing gets parenting message boards and PTA meetings quite as fired up as a good old-fashioned vaccination debate. Even though nurses, doctors, and pretty much every governmental health body the world over has told everyone repeatedly that vaccines are safe, healthy, and necessary, there's still a contingent of people out there who decry the practice and choose to forego vaccinations altogether. There's also another group delaying vaccines who are just as vocal. But what are the repercussions of that practice? You should know how delaying vaccines affects your kid later in life.

Dr. Allen Craig, deputy director of the Centers for Disease Control and Prevention's (CDC) National Center for Immunization and Respiratory Disease didn't mince words in an interview with Healthline when he said, “Infants and young children who follow immunization schedules that spread out shots — or leave out shots — are at risk of getting sick.” And, according to the CDC, those illnesses could lead to death, disfigurement, and other long-term health problems. In the case of the MMR vaccine, the American Academy of Pediatrics (AAP) reported that "a recent study demonstrated that delay of the measles, mumps, and rubella vaccine until after 15 months was associated with a higher rate of febrile seizures."

The problem with possibly contracting a disease from a spread out immunization schedule is that many of these diseases can cause serious injuries, if not death. Measles can cause hearing loss according to research and statistics, and the NHS explained that the mumps can cause encephalitis and permanent brain damage. Polio can put you in a wheelchair for your entire life and cause lifelong breathing problems.

But are there any benefits, even tiny ones, from delaying vaccines? Not according to the CDC. The website for the CDC noted plainly, "Children do not receive any known benefits from following schedules that delay vaccines." The organization is also sure to explain that receiving immunizations based on the expert-approved schedule will not "overload" your child's immune system or make them sick. "The antigens in vaccines come from the germs themselves, but the germs are weakened or killed so they cannot cause serious illness. Even if babies receive several vaccinations in one day, vaccines contain only a tiny fraction of the antigens they encounter every day in their environment. Vaccines give your child the antibodies they need to fight off serious vaccine-preventable diseases."

Pediatrician Dr. Matthew Davis told the University of Michigan that the trend towards delaying or foregoing vaccines is growing, and will likely lead to more outbreaks of disease, decreasing the relative reliability on herd immunity for those people who cannot be vaccinated. Herd immunity is the name of the concept for when large portions of the population are immune to a disease and they protect those who aren't by not becoming vectors for the disease themselves, thereby not exposing others to the virus.

Davis said of the studies surrounding vaccine delay and non-medical exemptions for vaccine denial that "these findings strongly suggest that states that allow parents broader discretion in vaccine exemptions are likely to have more outbreaks of measles."

It's a huge problem. According to Scientific American, "Concerns about vaccine safety have led up to 40 percent of parents in the U.S. to delay or refuse some vaccines for their children in hopes of avoiding rare reactions." Pediatrician Dr Simon Hambidge told the publication that delaying the vaccine not only puts your child at greater risk of seizure in the case of the MMR vaccine, but that “delaying also makes for increased visits to the doctor’s office, along with the time and hassle and risk of exposure to other infectious diseases in the doctor’s office.”

In the end, it's your choice, and yours alone. There are definite consequences and reactions to delaying vaccines that you need to be aware of though. Not only do experts claim that it can put your child at risk for life-changing diseases, but if you delay, your child might not be able to attend school or participate in certain activities. It can also be difficult to find a pediatrician willing to follow your ideal schedule, so be sure to do your research.