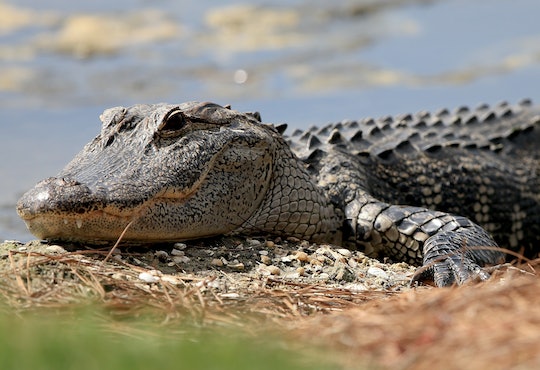 How Did An Alligator Attack A Toddler At Disney? It Was A Horrific Accident

Even more tragic news has come out of Orlando Wednesday, after a 2-year-old boy went missing after being snatched by an alligator at Disney's Grand Floridian resort. How did an alligator attack a toddler at Disney? According to CNN, the child was wading in less than a foot of water at the edge of a lagoon when the alligator dragged him into the water. The attack happened Tuesday night around 9 p.m., when the boy and his family were sitting out "on a sandy waterfront area outside the hotel near the Seven Seas Lagoon," according to CNN. The toddler was playing in the water at the lagoon's edge while his parents watched nearby, and according to witnesses, both of them ran into the water to try and save their son when the alligator attacked, but neither of them could get him free. The boy's 4-year-old sister was also on the beach. A lifeguard was on duty but was too far away to help in time, according to authorities, likely because the lagoon was marked as a "no swimming" zone.

According to NPR, authorities searched the water through the night, with the help of two boats, an alligator tracker, and approximately 50 people. Four alligators have been removed from the lake and euthanized as a result, but none of them showed any signs of being involved with the boy's attack. The boy has yet to be found, though Orange County Sheriff's Office spokesperson Jeff Williamson said Wednesday morning that they are still considering the search a "search and rescue operation," noting that they "are hoping for the best," and will still somehow find the boy alive. CBS News reported that Disney has also closed all of its beaches out of an "abundance of caution" after the attack.

The boy and his family were visiting from Nebraska, and had been vacationing at the resort since Sunday. According The Independent, witnesses described seeing the boy's father wrestling with the alligator, though he was unable to get his son free.

Twitter user ChristianTheMagician was also at the resort with his family when the attack took place, and shared updates on his Twitter account as details of the accident unfolded:

Animal expert Jeff Corwin weighed in on the attack, telling CNN that, while alligator attacks like the one at Disney are unlikely in such highly-regulated areas, Florida is home to millions of alligators, and it's possible for them to enter areas like the Disney lagoon undetected. Orange County Sheriff Jerry Demings echoed Corwin's sentiment, saying, "This is Florida, and it's not uncommon for alligators to be in bodies of water."

As the search continues for the little boy, not much more can be done except to wait and hope for the best. Chad Weber of The Florida Fish and Wildlife Conservation Commission told CNN that they are also investigating and are "putting every effort into locating the child and trapping this alligator," adding that they'll "be here with [the family] until there's a resolution."