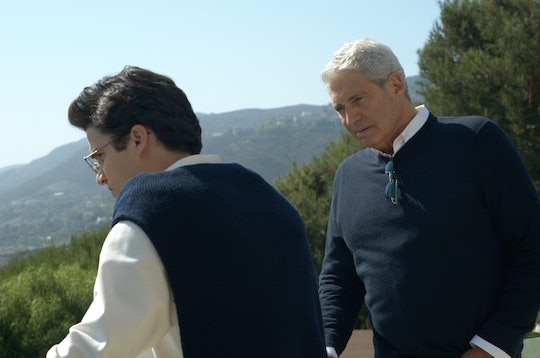 In the sixth episode of The Assassination of Gianni Versace, "Descent," viewers will get to know a little more about the events that led to Andrew Cunanan's murder spree. That includes his relationship with a wealthy older man named Norman Blachford, who he was involved with in 1996. But how did Andrew Cunanan and Norman Blachford meet?

Versace takes the bulk of its inspiration from reporter Maureen Orth's book Vulgar Favors. She had been following Cunanan's crimes and writing about them for Vanity Fair even before his murder of Versace. In the book, she detailed how Cunanan and Blachford first crossed paths.

It seems like Cunanan was looking for a rich man to keep him in style around the time he met Blachford. Orth reported that in July 1994 Cunanan was invited to dinner by friends in La Jolla, and Blachford was another of the guests present. Blachford was a millionaire thanks to a sound-insulation business he had since retired from, and he was recently single due to the death of his long-term partner.

Cunanan and Blachford's relationship progressed gradually, with Cunanan traveling from San Diego to visit Blachford in his Phoenix home or accompanying Blachford to Europe. Orth wrote about what drew them together, saying:

[...] Norman was amazed by how much Andrew knew about architecture and paintings. Andrew took care of the details and organized the travel plans. He was a lively traveling companion, and for someone like Norman, who was naturally subdued, Andrew was also a great connector. In San Diego, particularly, Andrew knew virtually all of gay society.

A year after they first met, Cunanan moved into Blachford's La Jolla condo on the beach. A friend of Cunanan's named Robbins Thompson told Orth that they were both aware the relationship had a financial component, in which Cunanan would act as a companion and Blachford would pay his way. Blachford handled Cunanan's credit cards on top of giving him a monthly stipend of $2.5k. He also gave Cunanan a new car, and Cunanan continued to accompany Blachford on trips. At Cunanan's urging, Blachford purchased another home in La Jolla.

"When [Andrew] moved in with Norman, he basically knew he was going in there on a strictly financial basis," Thompson told Orth in Vulgar Favors. "There was obviously a great deal of affection. There was no question about that. But they were both clear-thinking guys, and they knew what was going on."

The relationship ended a year after Cunanan moved in, and money appeared to be at the heart of the conflict. Though Cunanan was seeing other people while he was with Blachford (including David Madson, who would become his second victim), Vulgar Favors presented an argument about a Mercedes SL 600 convertible as the final straw. According to Orth, Cunanan said he would leave Blachford if he was not gifted the car, and Blachford refused. Cunanan's other demands included flying first class, an even more generous allowance, and a spot in Blachford's will.

Cunanan's demands were not met. Instead, he and Blachford parted ways, with Cunanan earning a payout of $15k on his way out the door. He moved in with friends while Blachford moved on with his life, though the San Diego Reader reported that Blachford did attend Cunanan's last hurrah in San Diego. He threw himself a going away party shortly before buying a one-way ticket to Minneapolis, where he had plans to meet with Jeff Trail and David Madson.

Viewers of Versace have already seen how that weekend turned out. Now the show will continue its backwards trajectory through the events that brought Cunanan to that place.