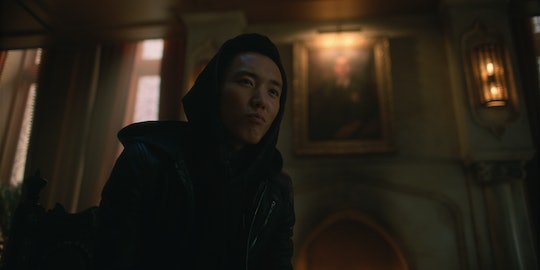 Netflix’s The Umbrella Academy follows the story of seven children mysteriously born on the same day, and then adopted and raised to save the world by an eccentric billionaire. The series flashes forward 30 years into the future, when only six of the seven siblings remain. The seventh child’s name — Ben Hargreeves — is seen on a headstone, but fans want to know, exactly how did Ben die on The Umbrella Academy?

Warning: Spoilers for The Umbrella Academy Season 1 ahead.

Unfortunately, the series doesn’t give much detail about the circumstances surrounding Ben’s death, so there’s no way to know for sure. When six of the remaining Umbrella Academy siblings — Klaus (Robert Sheehan), Number Five (Aidan Gallagher), Luther (Tom Hopper), Allison (Emmy Raver-Lampman), Vanya (Ellen Page), and Diego (David Castañeda) reunite for their father Sir Reginald Hargreeve’s funeral in Episode 1, they go out into a courtyard where Ben’s statue stands. His headstone reads “may the darkness within you find peace in the light.”

So Ben is already dead when the show begins, but in a series of flashbacks, you get to see what he was like as a child. In Episode 1 — when the siblings were sent to foil a bank robbery as kids — Ben (aka The Horror) begrudgingly turned into a tentacled monster and killed the robbers, but you could tell that he wasn’t happy about it. Now in the present, Ben (Justin Min) is seen as a ghost, and he can only be seen and heard by his brother Klaus. And in the season finale, Ben plays a pivotal role in the fight against his sister Vanya and her deadly powers.

The Umbrella Academy is based on a series of comic books written by My Chemical Romance frontman Gerard Way, who also serves as the show’s executive producer. In an interview with Forbes, Way revealed that Ben’s death hasn’t been covered in the comics, but he should explain it sometime in the future. “What happened to Ben, what happened to the Horror, I never really answered that,” said Way. “I originally just wrote the character to be dead, that was his function. I always knew I was going to resolve it. The thing about The Umbrella Academy, it's almost like improvisational jazz, you're just making it up as you go along — I have lots of things planned for eight volumes of this graphic novel, but some of it are still questions, and I sit down and I have to answer those questions.”

When talking to The Hollywood Reporter, Way said that while he continues to write The Umbrella Academy graphic novel series, he is also providing showrunners a map for the future of the show. “There's eight graphic novels planned in total, and we're on the third series right now,” he told the outlet. “Now that we've started up again, we're averaging about a year and a half per series for the turnaround. Steven knows what happens in all of those eight volumes; I wrote up this document for him and the writers, which explains what will happen through all of the graphic novels.”

So while viewers may not have all the answers they need about Ben’s death right now, it’s comforting to know that somewhere down the line, the series will offer more of an explanation.