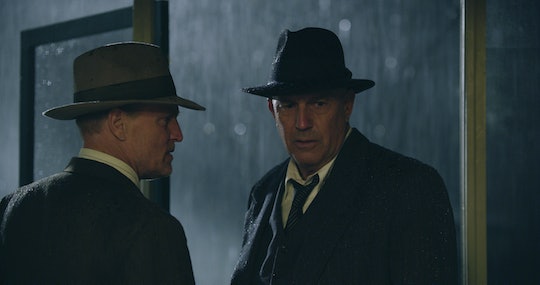 Netflix's The Highwaymen revisits the crimes of real life bank robbers Bonnie Parker and Clyde Barrow, but does so from the point of view of the officers who trailed them across multiple states. Kevin Costner and Woody Harrelson star as Frank Hamer and Maney Gault, the men who eventually led to the death of the famous criminal couple. But how did Bonnie and Clyde really die?

The Highwaymen depicts Bonnie and Clyde's death with an accuracy that was intended to convey just how awful the moment was. According to the History Channel website, on May 23, 1934, Bonnie and Clyde were gunned down by officers in a stolen Ford. Though they'd been driving around from state to state, the police had tracked them to Louisiana, where they settled down to wait on the highway near Sailes. The trap worked: when Bonnie and Clyde's car appeared, the officers let loose a storm of bullets, ending their lives.

In 1934, The New York Times described the shocking violence of Bonnie and Clyde's deaths. The officers "riddled them and their car with a deadly hail of bullets" until the car crashed. Then the police "poured another volley of bullets into the machine," lest there had been any survivors.

The Highwaymen attempted to recreate that moment down to the last detail. Director John Lee Hancock told USA Today, "I wanted the audience to see that this is brutal. This is violent, overkill. Once those guys started firing, they were not going to stop until their guns were empty."

The movie even filmed Bonnie and Clyde's death scene in the exact same spot where it happened eighty-five years ago. According to USA Today, they covered the paved road in dirt so that it would look just like it did all those decades ago. Costner remarked on the added weight that gave the scene, because it really brought home the reality of what had happened. Not long before Bonnie and Clyde were gunned down, they had been at a nearby diner ordering bologna sandwiches. They had no idea what was about to happen to them.

"I cannot tell you how many times I stood at that same point and realized that when that car appeared on that turn, those two had only 500 yards, maybe 25 seconds," Costner said. "Then they were going to be dead."

Per the FBI website, the police knew that Bonnie and Clyde would be in Louisiana because just two days before their murder, they had attended at party at Black Lake. They left shortly after, but were due to return, which was how the officers knew to lay a trap for them on the highway. Bonnie and Clyde had been linked to a host of crimes that included stealing cars, committing robberies and burglaries, and at least 13 murders.

It's unclear why Bonnie and Clyde were killed instead of apprehended and put on trial. They had been evading law enforcement for some time. And, according to the FBI site, Barrow had allegedly murdered two police officers. The Highwaymen takes a closer look at how the lawmen following them felt, and may explain why the end played out like it did.