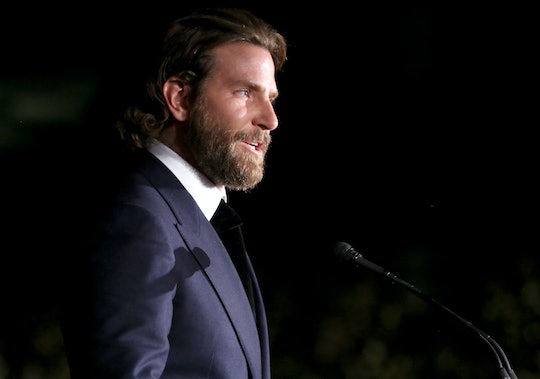 How Did Bradley Cooper & Irina Shayk Meet? They Might Be Having A Baby

On Wednesday, just after Irina Shayk walked the runway at the Victoria's Secret Fashion Show in Paris, news broke that she and Bradley Cooper were reportedly expecting their first baby together. The news sort of came out of the blue, since the couple keeps a fairly low profile, so don't feel bad if you don't know how Bradley Cooper and Irina Shayk met in the first place. It hasn't been that long, to be fair.

Shayk and Cooper were first spotted around New York City together in May 0f 2015 and they've been going steady since then. A source told E! News that Shayk is in her second trimester and is "so excited" about having a child. Representatives for both have not officially confirmed the news, according to E!.

Despite a possible spat at Wimbledon this summer (which really boiled down to someone on Twitter catching Cooper and Shayk looking grim in the stands and nothing more) the two are very serious and have discussed having a family together. A source said in September, "They both want kids one day and that's been discussed between them. They have a huge attraction to each other between them and their personalities and their sexual energies." After their first public sightings in spring of 2015, Shayk vacationed with Cooper and his mother later that summer.

Earlier this month, Shayk was also spotted running errands with Cooper's mom, with whom he is reportedly super close, in an adorable oversized Under Armor shirtdress, which might be the only celeb maternity look I would ever be able to relate to, if the reports are true.

Not that she needs to cover up, by the way. Shayk walked the Victoria's Secret Fashion Show in Paris on Wednesday in a golden silk trench coat as well as a red outfit that tied in the front with some fringe. Backstage, she wore the standard pink silk Victoria's Secret robe. All the outfits are currently fueling rumors that Shayk is hiding a baby bump. But either way, she slayed.

Before dating Shayk, Cooper was with Suki Waterhouse. The two reportedly broke up because Cooper was ready for a family and the then-23-year-old Waterhouse wasn't ready for all of that commitment. Shayk dated soccer star Cristiano Ronaldo for five years before meeting Cooper. But all that might be behind them now.

The two have reportedly been discussing marriage, but just like this pregnancy, it's all conjecture until one of them gets on social media and confirms it for us all. Let's hope they're happy the secret is out.