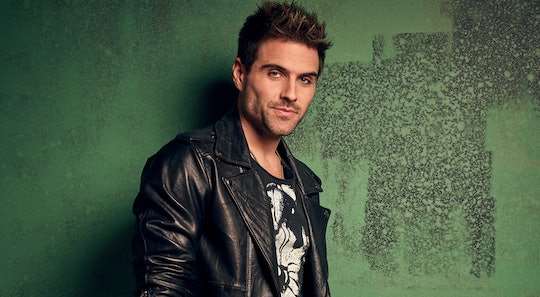 Here's How Brennin Hunt Broke His Ankle On ‘Rent: Live’

Actor Brennin Hunt — aka Roger — confirmed that he broke his ankle shortly before the Rent: Live performance on Sunday night. Considering this setback was a big deal for the show (there wasn't an understudy in place), it's understandable fans want to know how Brennin Hunt broke his ankle. Apparently, the injury occurred during dress rehearsal.

One of the worst things that can happen to an actor before a live performance is an injury. No one knows this better than Hunt, who broke his ankle the day before Rent: Live. The injury happened during dress rehearsal, which was — to put it mildly — terrible timing.

"Last night during a live performance of Fox's production of Rent, one of the actors, Brennin Hunt, was injured. But in the spirit of Rent, everyone — producers and cast, original and current — is dedicated to ensuring that tonight’s broadcast must, and will, go on," Fox network said in a statement about the incident, according to The Hollywood Reporter.

Although it's not exactly clear how Hunt broke his ankle (I assume dancing and jumping around set had something to do with it), it's clear the injury is serious based on an Instagram video he shared. In the clip, Hunt showed off a huge cast on his right foot as he revealed to fans that production had to alter his costume.

"They’ve showered me with love and kindness, which is the essence of this musical," Hunt added about the support he received following the accident, according to E! News.

What's pretty bonkers about this entire situation, however, is that Rent: Live didn't have an understudy for Hunt's role.

"We actually don't have stand-ins," Rent: Live director Alex Rudzinski explained to the press, according to Newsweek. "What we do have is a backup recording from the night [before]. The night before we do a full dress rehearsal on camera to tape, so should the metaphorical meteor hit the studio, we can switch to that backup recording, and it's with an audience, and so there is a degree of backup there."

As for the public's reaction to the whole no understudy thing? Some fans thought Hunt deserved to continue on as Roger, while others argued that Fox should have found someone else.

"So irritated people are complaining about them not using an understudy for Roger," one person tweeted. "Brennin Hunt put his heart and soul into this performance. He deserves to be included. #RENTLive Don't @ me."

"It's unfortunate what happened to Brennin Hunt but you can't expect the audience to be satisfied with a mediocre dress rehearsal version," someone else said. "Why not use an understudy?"

"Low-key they should’ve had adam pascal understudy for brennin, he can do that role no matter what age," a commenter pointed out.

One supporter of Brennin penned: "I get that it sucks this isn’t live. And Fox failed by not having an understudy. But I hope everyone isn’t too hard on Brennin. This is his big break and dream role. The first show he ever saw was Rent. And he’s the nicest guy you’ll ever meet."

No matter where you might fall in this debate, I think everyone wants to see Hunt get better. Injuring yourself before a big gig is upsetting no matter how you slice it.