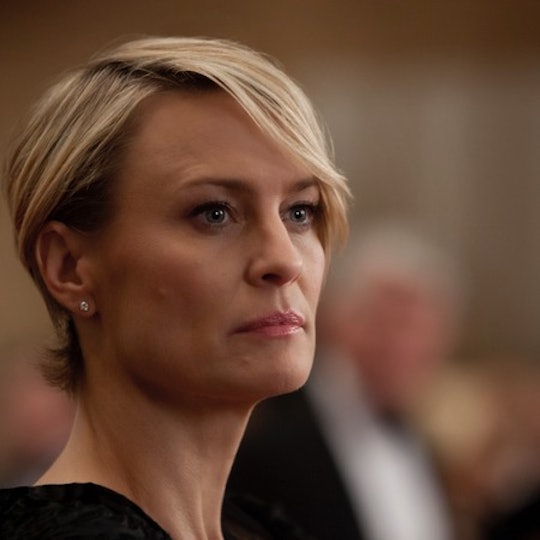 How Did Claire's Dad Die On 'House Of Cards'? We Don't Know Much About His Death

Season 3 may have ended just as the battle for (or against, depending on where your loyalties lie) Frank and Claire Underwood's union is just beginning, but Season 4 picks up right where the fight left off. Claire's in Texas, where she grew up, (spoilers ahead) vying for a seat in the Senate to represent Texas's 30 Congressional District, and we find out that although her dad is dead, her mom is alive and well, and in Texas. (What we don't know is how Claire Underwood's dad died.) We find the First Lady as she's about to step foot into her childhood home in Highland Park, clearly still estranged from the president after leaving him high and dry in the White House. Though it's obvious that some time has passed (Frank's knee-deep in the primary election), the emotional wounds of the fight are still visible on both characters.

After meeting Elizabeth Hale (played by Ellen Burstyn), we learn that the relationship between Claire and her mom is rocky, to say the least. It's obvious that the women haven't spoken in some time — Hale hints that things haven't been on stable ground since Claire married Frank more than 30 years ago — but it's interesting that Claire holds her father in such high regard while it seems she's got little, if any, respect or concern for her mother. So how did Claire's dad die? And why did it shake up the family's DNA so badly?

There isn't a ton of information available on Claire's dad, but she's made it known in previous seasons that she grew up wealthy and privileged in an area of Dallas known as Highland Park, and that only becomes more evident when we get a view of the grounds where she was raised. Underwood comes from a family of wealthy and prominent ranchers, so we can assume that her dad was involved with that leg of the business and that that's where he made his money. Claire also affectionately refers to her father as "Daddy," which only shows just how highly she thinks of him. In Season 2, Claire talks about how her dad took her to Delaney Plaza — the site of JFK's assassination — and though she remembers the the day with sadness, you get the sense that it's her dad she misses more than anything.

Though it'd be silly and insensitive to speculate on what caused her father's death, the fact that he's passed still seems to be a really tender thing for Claire. His portrait hangs in the formal living room of the family's home, but to be perfectly honest, I didn't ever get the sense that Elizabeth Hale was quite as fraught with emotion over her husband's passing as her daughter was (and still is). But I'm sure the more we get to know Elizabeth Hale, the more the details on Claire's father will surface.