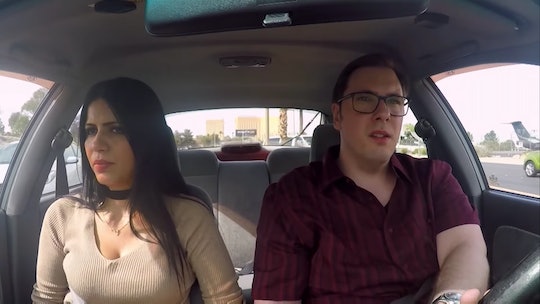 When, on 90 Day Fiancé, Larissa arrived in Las Vegas to live with her fiancé Colt, she was immediately disappointed — by the city, by the house, and by the fact that she had to live with Colt's mother. So considering their awkward start on the show, how did 90 Day Fiance's Colt and Larissa meet?

According to their bios on TLC's press website, self-described "mommy's boy" Colt and Brazil native Larissa met online. "After having struck out a few times online with American girls, I thought maybe I could search outside the country, maybe find a girl, and then I met Larissa," Colt said on 90 Day Fiancé. "I had sent Larissa a message, and to my surprise, she actually responded, and we started talking. It wasn't long before I decided I really wanted to meet her in person."

So the two met in real life for the first time on a vacation in Cancun, Mexico. Colt sounds almost breathless when he describes seeing his future fiancée for the first time in real life. "I saw her in like, slow motion," he said. "I thought I was having a heart attack. She was the most beautiful woman I've ever seen. I was like, I'm done. This is it." On the fifth and final day of their romantic vacation, just before heading to the airport, Colt proposed to Larissa, and she said yes.

But once Larissa got her K-1 visa and headed to Las Vegas, their fairytale romance got a harsh dose of reality. The couple clashed over small things — for example, Larissa was upset when Colt didn't have flowers for her when he picked her up from the Las Vegas airport, and she didn't understand why it was such a big deal for him to pay the fee to change her flight. "Larissa has only been in Las Vegas for three hours, and she has literally not stopped complaining since she arrived here," Colt narrates on the show.

As the end of Larissa's visa continues to approach on the show, the chances of things working out for the couple are looking pretty slim. In the most recent episode, Colt and Larissa's wedding planning process was filled with disagreements and disputes. That said, it seems like the couple did wind up tying the knot in real life.

Larissa's Instagram is, unfortunately, set to private, but Colt's is not. And on his page he consistently posts photos of himself and Larissa together and apparently still very much in love. It doesn't necessarily prove that the two are married, but seeing as she wouldn't legally be allowed to stay in the country if they weren't, I think it's a pretty safe bet.

It will be interesting to see how their relationship continues to unfold as this season of 90 Day Fiancé goes on!