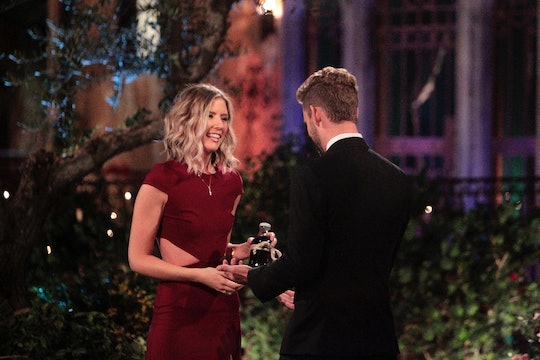 Danielle M. Opened Up To Nick In A Big Way

We may remember Danielle M. most as the girl who fed Nick homemade maple syrup in this season's premiere of The Bachelor. On Monday night, though, she (thankfully) gained a new claim to fame: Danielle M. was the first Bachelor contestant to get a date with Nick on the one-on-one variety. It seemed like a fairytale first date, complete with a helicopter ride and time on a yacht (yes, really). As they sat down for dinner, however, both of them became serious about their pasts. How did Danielle M.'s fiancé die? The Bachelor contestant opened up to Nick.

It was clear that when Danielle and Nick sat down for dinner that they were going to open up. Nick's past was put on public display – as we all know – but Danielle's was unknown. The neonatal nurse is one of the most quiet contestants in the bunch, but she did not shy away from telling Nick more about herself. As it turns out, Danielle was engaged prior to coming on The Bachelor, and it ended tragically. Unfortunately, her fiancé – who according to Wetpaint was named Nick Haag – passed away in 2011. While the couple was planning their wedding, Haag died of a drug overdose.

Haag was a 29-year-old musician. RealitySteve wrote about the date, as well as linked to Haag's obituary. Like Danielle, he lived in Wisconsin. He was apparently a guitarist in a band called "Barkeep" and planned to move to Nashville.

According to Wetpaint, Danielle changed her life after Haag's death. She ended up moving to Nashville herself to pursue a modeling career:

To remember her fiancé, she got a tattoo of the word "strength" of her finger. Danielle certainly has strength to not only come into her own after such a heartbreak, but to not be afraid to speak about it. Telling Nick about Haag was probably not an easy feat for Danielle, but she did it – and on the first one-on-one date of the season, no less.

Nick thought Danielle was pretty brave as well, and gave her a rose right after the date was over. Perhaps the two will fall for each other and each have happy endings after individual hard times.