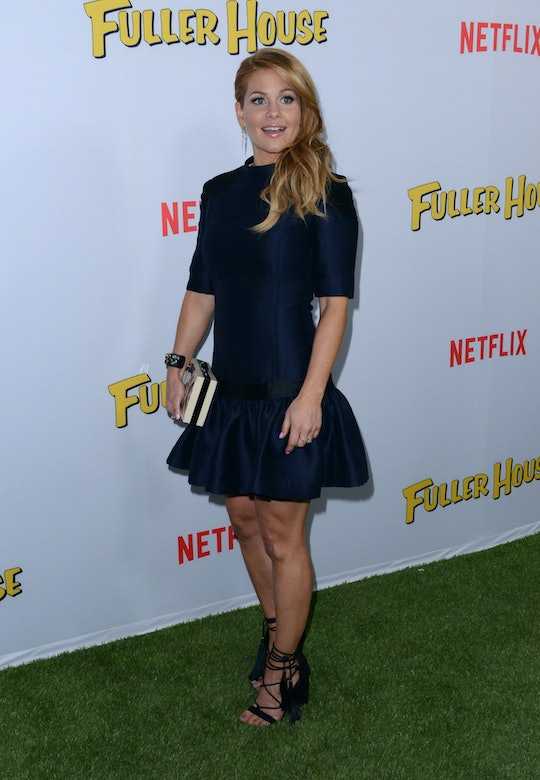 How Did DJ's Husband Die In 'Fuller House'? It's Actually A Really Sad Story

The new Netflix reboot of Full House puts newly widowed DJ, played by Candace Cameron Bure in an eerily familiar situation: on her own and having to raise her kids without her spouse, just like her Dad, Danny, did before her. Now, DJ, also like her Dad, is leaning on her sister, Stephanie and best friend Kimmy to help raise her family. But how did DJ's husband die?

First, we can dispel any rumors that DJ was married and lost her Full House sweetheart, Steve. Viewers don't really get an entirely clear idea of what happened between Steve and DJ, but, instead of living happily ever after with Steve, Deej instead married firefighter Tommy Fuller, hence the name of the show Fuller House. See what they did there?

Sadly, Tommy was killed in the line of duty. They don't really ever divulge details, but you get the idea that he was a total hero.

Can I just take a minute to talk about how sad it is that both Full House and Fuller House started with the tragic death of a parent? Pretty heavy stuff for a frothy family show. Why didn't I ever realize how awful that is as a kid? But a little good news for fans of Full House and the relationship between DJ Tanner and Steve is that the young loves actually do reunite on Fuller House.

Personally, there's nothing that can ever mean as much to Fuller House than the return of Uncle Joey, but maybe that's just me.

In the meantime it's still fun to watch DJ become the parent and navigate her way through raising her two sons, who certainly have familiar personality traits. There's tween Jesse Daniel, who is a musician who's very popular with the ladies, and Max, who's just a school-aged kid and is already starting to act a lot like his very fastidious grandfather, Danny.

It's hard not to miss Michelle, but the Olsen twins just couldn't be persuaded to reprise their role as the youngest Tanner sister. Still, we'll always have Kimmy Gibler and her daughter, Ramona, to bring that certain, special brand of weird to Fuller House. Here's a little tutorial to help you master the #GibblerGallop for your next family wedding.

I'm really sorry about DJ and the kids losing their fake husband/Dad, but here's a little taste of DJ and Steve reconnecting all these years later, which makes it all a little less sad.

Is Fuller House a little cheesy? Perhaps. But it's always oddly satisfying. Now we just need a cameo from one of the Olsen twins as Michelle and Fuller House will officially have everything a Full House fan could ever want.