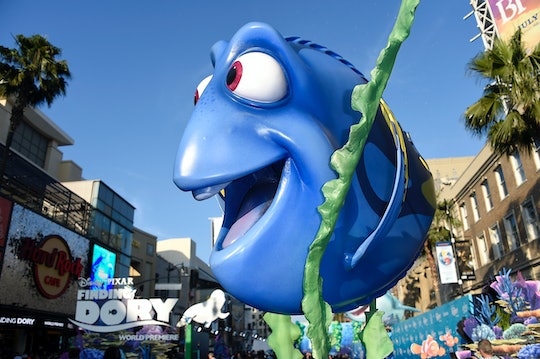 How Did Dory Lose Her Memory? The New Film Focuses on Dory's Story

It has been 13 years since the world's most beloved Blue Tang, Dory, was introduced to the world and our hearts in Disney Pixar's Finding Nemo. Now, Dory has a new chapter and story for her own in the recently released, Finding Dory. Perhaps one of Dory's most defining traits is her ability to forget things. But how did Dory lose her memory?

When we're introduced to Dory in Finding Nemo, Dory is defined by her forgetful memory as she goes on a quest with Nemo's dad, Marlin to help find Nemo. Dory is a great foil to Marlin's strict and uptight character and provides great comedy to the first installment. In a clip from the first movie, Dory explains to Marlin why she can't remember much. "I suffer from short term memory loss," Dory says to Marlin. "It's true, I forget things almost instantly. It runs in my family. Well, at least I think it does," Dory says.

This means that Dory's short term memory loss is hereditary, at least, according to Dory herself. Meaning, she wasn't in an accident that caused her to lose her memory but inherited it from her family of other Blue Tangs. This makes it even more important for Dory to find her family in Finding Dory.

According to Finding Nemo and Finding Dory director Andrew Stanton in an amazing interview done by Emanuel Levy, Dory's short term memory loss is indeed something that Dory was born with. Stanton decided to make Finding Dory because he felt that Dory had been "a little two dimensional" in the first film and wanted to tell her backstory. Dory's short term memory loss connects her to her parents through nurture and care, making it even more important that Dory finds them. According to Stanton,

[Her parents] don't try to change her. They just want to help her own who she is. Being a parent and seeing my kids grow up and enter the world, I realize that all kids are born with certain temperaments, flaws, quirks — and it will probably be who they are. You probably spend most of the time worrying about those things as a parent, too — you don't lose sleep over the things they do well. The best quality I could give Dory's parents is that they never doubt her.

At the backbone of Dory's disability is two parents who intend to love her and take care of her, despite her memory loss — and it shows in the new film's opening scenes when Dory's parents do their best to help their daughter remember things. By explaining a little more about Dory's backstory, Finding Dory is also able to explain how Dory is able to remember certain things as well. According to producer Lindsey Collins,

While Dory forgets details in her day-to-day life — like Nemo's name — her emotional memory is fine — she knows she loves Nemo and Marlin. And the love she has for her parents has been with her all along.

And while Dory may have been born with short term memory loss in the film, the fact that fish have a short term memory is merely a misconception. According to the BBC, fish can remember things for many months. How interesting!