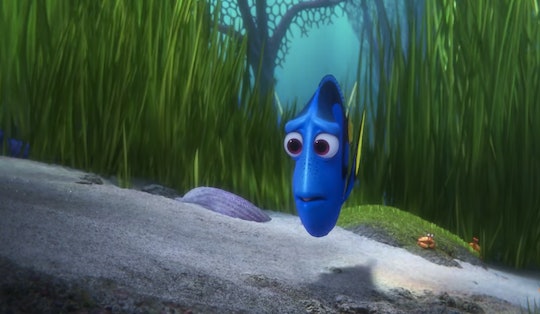 How Did Dory Lose Her Parents? 'Finding Dory' Explains The Mystery

In the 2003 Pixar hit Finding Nemo, we fell in love with the story of an overprotective clownfish, Marlin, who set off on an ocean-wide search to find his son, Nemo. Now, in the highly-anticipated sequel, Finding Dory, we learn much more about the forgetful, regal blue tang named Dory, who loses her memory every 10 seconds and tagged along with Marlin in the first film on his journey (a journey which, in case you've forgotten, took them all the way to Sydney Harbour to find little Nemo). Dory easily became a fan favorite and the latest installment in the underwater adventure explains the mystery behind how Dory lost her parents when she was a young fish and how her short-term memory loss that subsequently landed her in a few aquatic conundrums.

The animated movie released on June 17 focuses on the adorably amnesiac fish — voiced by Ellen Degeneres — as Dory sets off on a journey to be reunited with her parents. Viewers learn the background behind Dory’s character as she gets captured and taken to a public aquarium in California and meets many new whimsical sea creatures who help fill in some blanks. In the movie, Marlin and Nemo do try to find and rescue Dory from captivity, but Finding Dory is more about Dory finding herself.

We learn in Finding Dory that Dory begins to have flashbacks of her parents after helping Marlin find Nemo and her memory is triggered after she hears a lecture from Mr. Ray about migration and how sea animals can use their instincts to return home. Dory begins to vaguely remember that she lived with her family at the "Jewel of Morro Bay," which is a fictional Marine Life Institute in California. Dory's childhood home seems to be based on and can be compared to the Monterey Bay Aquarium's "Open Sea" exhibit.

“The experience is viscerally similar to an event that separated her from her parents so long ago,” director Andrew Stanton said in an interview with film critic Emanuel Levy. “She’s flooded with memories and suddenly very motivated to track down her family.”

Dory once lived in the fictional aquarium’s “Open Ocean” exhibit with her parents when she was young. Her parents had warned her not to play too close to the aquarium pipes because they pumped water from the ocean in and out of the exhibit.

One day, curious as she was, Dory saw a beautiful purple shell for her mom, which her parents often collected and placed in the sand to guide Dory home, and she swam too far out to collect it. Dory was swept up in the in a strong current of the pipes, or the “undertow” as they called it, and was carried out to sea.

Due to Dory's short-term memory loss, she kept forgetting that she had been looking for her parents and, as the years passed, it became even harder for her to remember what she was looking for.

“She wanders the ocean for most of her life,” Stanton said in the same interview with Emanuel Levy. “And slowly forgets why.”

"While Dory forgets details in her day-to-day life—like Nemo’s name—her emotional memory is fine—she knows she loves Nemo and Marlin," producer Lindsey Collins said in the interview Emanuel Levy with Stanton. "And the love she has for her parents has been with her all along."

Finding Dory touches on how Dory's memory loss has affected her throughout the years, but that the strong and unconditional love she has for parents has stuck with her forever — and it won't disappear in 10 seconds.