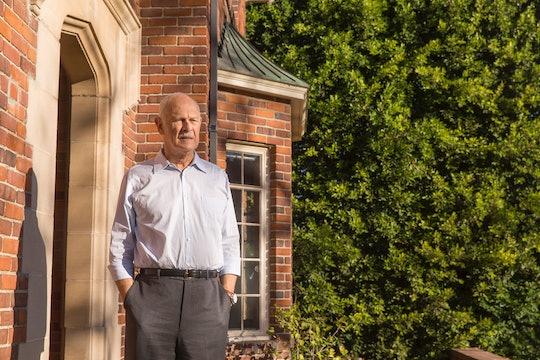 Dr. K's Backstory Will Be Revealed On 'This Is Us'

At this point, it's more of a surprise if you don't cry at the beginning, middle, or end of an episode of This Is Us and no characters are safe from the emotional turmoil that comes with being on this show. As the series visits both the past and present, fans have been introduced to Dr. K, and viewers will see him again around the time he first lost his wife. But how did Dr. K's wife die on This Is Us? Episode 12 is set to, once again, take place in both the present and past of the Big Three's life and cover not only how baby Randall made it to the hospital, but also how Dr. K was going through a loss of his own right around the time he was brought in to deliver Jack and Rebecca's triplets.

In a promo for Episode 12, Dr. K's son and daughter-in-law sit down with him to see how he's doing after the loss, while making small talk about the latest Star Wars movie since it's much easier to avoid hard feelings like this than meeting it head on. But how did Dr. K's wife die? He revealed in his conversation with Jack that his wife died after a battle with cancer, though, he didn't specify on what type it had been. He moved on without going into much detail, but I think it's safe to say this had been a prolonged sickness.

In the promo, it's said that Dr. K's wife has been gone at this point for 14 months and it seems like he's having a difficult time bouncing back from the loss, understandably. At the time of Dr. K's surgery on a Christmas Eve from years ago, he said that he was 73 years old, and it was about 10 years after the birth of the kids, meaning that when his wife passed she was likely in her early 60's. So it's unfortunate that they were robbed of even more time together.

Episode 12 will mark the first time Dr. K's wife is going to be mentioned on This Is Us in such a big way, along with his private life in general. And since the show is no stranger to sudden twists, as well as too much emotion, just be ready for anything — but mostly for the off-chance that it will suddenly feel like someone in the room is cutting onions. In other words, you're gonna need those tissues handy.